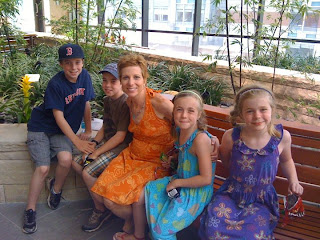 Well we got some great news from Dr. Munshi at Dana Farber……. There is “Zero” Myeloma detected in my latest biopsy!  Yup ZERO!!  It feels so good to say that!   All the treatments I have received for the last 12 months including the Stem Cell Transplant worked!  And I’m sure all the prayers and positive thoughts have helped as well.  I was told by Dr. Munshi to keep up my running and that he would see me in October!  I will be continuing my maintenance therapy of Revlimid and Dexamethasone and my monthly infusions of Zometa.  But that is just fine.  My body, so far seems to be tolerating the drugs fine and my energy has never been better.  So hopefully my body will continue to get stronger and I can focus more of my energy on what is most important my four beautiful kids who are the center of my universe and my incredible husband.


Now with all my new found energy, I am excited to focus my time on helping others fight this incurable cancer by supporting organizations such as the Multiple Myeloma Research Foundation (MMRF). The MMRF is the largest non-profit sponsor of myeloma research and  has raised over $160 million since its inception to fund nearly 120 laboratories worldwide. In addition, the MMRF has facilitated 30 clinical trials.  An example of success has been the development of Revlimid by Celgene which was made possible by support from the MMRF.


I have begun several fundraising efforts which you will all hear about in the upcoming months for MMRF.  All these events will raise money towards our total goal of $ 15,000.00 between now and April 2012.   I’d like to take a moment to share more about them and the fantastic people that are helping me.


First, Lindsay Silvestri and Suzi Larson are helping me organize a neighborhood yard sale with baked goods on Sawtelle Road on July 17th from 9-3.  All the proceeds will go to support the MMRF.


Second, on August 7, 2011 we are holding a Night of Hope at Giorgio’s Ristorante and Meze Bar in Milford, NH.  It will be a night of incredible food, wine and entertainment.  We will also be having a silent auction.  All of the proceeds from this event will benefit the MMRF.  If you would like to reserve your table please call by 7/31/2011 (603) 673-3939.  The cost of this event will be $65 per guest.  If you have an item you would like to donate for our silent auction, please contact me at dreyerfamily@mac.com. 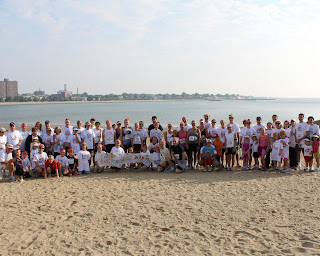 Third, on September 17th, we will be participating in our 2nd annual MMRF Race for Research – a 5K Walk/Run.  This year will be bigger and better than last year, and we hope that many of you who joined us last year will come back this year for a morning of family fun in Boston.


Finally, I have also begun forming Jeanie’s FEAT ( Fitness, Endurance, and Athletic Team ) to participate in fitness/endurance events as part of the MMRF Power Team in support of MMRF’s messaging and charitable fundraising.  Members of my team will be able to participate in endurance events of their choice and help to raise money/awareness for the MMRF.  I will be participating in the Bay State Marathon in October and the Boston Marathon in April.  One of the benefits is that you can sometimes get into exclusive events such as the Boston Marathon ( which sometimes require qualification ) by running on behalf of a charity.  If you want to be part of the team and help raise money for the MMRF, I can get you some really cool gear as well.


Well as you can you can read, there are lots of things to look forward to.  But first up is the big State’s Tournament for Mitch’s 10 Year old All Star Team this weekend!  It is going to be so exciting!  Well it’s time to catch up on some much needed rest.  I think tonight I am going to sleep better than I have in the last 13 months!  Thank you for all your continuing support and prayers!