The publisher was kind enough to send me a copy of this cookbook.

The subject is very near and dear to my heart, as both of my parents were diabetic, and Dom is borderline.

Although I’m not diabetic (YET, anyway), I’m looking forward to giving some of these recipes a whirl! 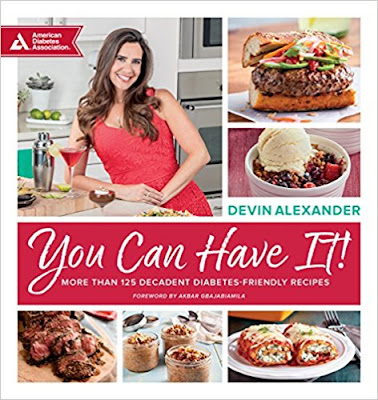 From the New York Times bestselling author of the Biggest Loser Cookbook series, an indulgent comfort cookbook filled with recipes for anyone who wants to be healthy, whether they have diabetes or not!


Whether you’re managing diabetes, want to lose weight, or just plain want to be fit while eating insanely scrumptious meals, weight-loss expert Devin Alexander is here to assure you, “You Can Have It!” The celebrity chef on the hit series, The Biggest Loser, and the author of the New York Times bestselling The Biggest Loser Cookbook series and The Most Decadent Diet Ever!, Devin Alexander, has created a collection of easy diabetes-friendly recipes that seem simply too good, and too decadent, to be healthy. Using her chef secrets, tips, and techniques that helped contestants on the hit show lose weight and that wowed customers in her restaurants, Devin Alexander has crafted more than 125 easy diabetes-friendly recipes that bust the myth that eating well means giving up the comfort foods you love. Best of all, Devin is living proof that these meals work—even as a chef, around food all day, she’s lost 70 pounds and kept it off for close to 30 years! With beautiful photographs, doable tips, simple techniques, affordable ingredients, and mouthwatering meals, this is the cookbook every person who cares about their health (whether they have diabetes or not!) will want to own. Inside you’ll find hundreds of decadent, simple-to-prepare dishes, including:

Even if you’re managing diabetes, heart health, or trying to lose weight, no type of meal is “off limits” and no favorite is forbidden. With small tweaks and the right approach, Devin is here to show that, yes, You Can Have It!

Biography
Media Personality, Multi-time New York Times Bestselling Author, Restaurateur, Healthy Comfort Food Chef, and Weight Loss Expert, Devin Alexander, is the Chef of NBC’s “The Biggest Loser”. Devin’s unique approach to healthy cooking and her motivational personal story have landed her regular, major, national television appearances for over 10 years, making her America’s Go-To Expert on Decadence without Consequence. Having maintained her 70-pound weight loss for close to 20 years, she lives and eats her message: you don’t have to deprive yourself to be fit and healthy.

Devin has shared her Devinly™ Decadent secrets as the host of Healthy Decadence on Discovery Health and Fit Tv from 2007-2011, as Host of “America’s Chefs on Tour” on PBS and through frequent appearances on The Today Show, Good Morning America, The Biggest Loser, Dr. Oz, Access Hollywood Live, The Doctors, Dr. Drew, The View, OMG Insider, Dr. Phil, FOX, CNN, HGTV, USA, Style Network and others as well as through over 500 magazine features including Prevention, Women’s Health, Men’s Health and Shape. She’s served as Culinary Advisor to Men’s Fitness Magazine and as Cooking Expert to Women’s Health in addition to penning columns in Clean Eating, Muscle & Fitness, Muscle & Fitness Hers, American Fitness and others.

After 9 years as the Owner and Executive Chef of Café Renee Catering, Devin now travels the country lecturing and consulting for major U.S. food and cookware companies. She’s a proud Ambassador of the American Diabetes Association, a Blogger for The American Heart Association, served on the Advisory Board of the American Culinary Federation’s Chef Child Foundation and spent years as Larry King Foundation’s Go-To-Chef to speak on “Obesity in America”. Her dessert line, Devinly Delites™ is heading to mass market soon.

When she’s not in her kitchen or traveling, Devin can be found on the beach by her home, playing her favorite sport, beach tennis. She plans to obtain a world ranking. :)