“Despite requests made under the Freedom of Information Act for correspondence out of the White House, the Obama administration is refusing to comply with calls to disclose discussions with Monsanto-linked lobbyists. (1)

The US-based non-profit group Public Employees for Environmental Responsibility (PEER) is demanding that the White House comply with a FOIA request for information that might link the Obama administration with lobbyists tied to the Monsanto corporation.

Monsanto is an agricultural biotech company that rakes in billions each year, has become the enemy of independent farmers in recent years after the corporation has sued hundreds of small-time growers and, in many cases, purchased farms that are unable to compete in a court of law.

As Monsanto’s profits grow and the group comes close to monopolizing the market for American agriculture, the company has at the same time thrived due its use of controversial genetically-engineered seeds.”

The White House is blocking information in an email from a Monsanto lobbyist and the White House. Under the FOIA -Freedom of Information Act the government is obliged under law to release such information to the public especially concerning a bio-piracy corporation who are overtaking US agriculture in a negative way.

No good can come out of President Obama’s hiring of ex-Monsanto employees and their lawyers for government high level jobs that are releasing more approvals of GMO seeds for American food production. Even though many countries are banning US food imports the President just doesn’t get it and now he’s covering it all up.

Obama’s support of Monsanto despite scientific proof that GMO is deadly to human health causes cancer, diabetes, and will cost a heavy price in higher healthcare costs, he refuses to listen to logic.

When Barack Obama ran for President in 2008, he promised to end the open doors to lobbyists. Now an email from a Monsanto lobbyist firm to a top level White House Policy Analyst is being kept secret.

The White House claims it is the “proprietary” information in the email that would give competitors of the companies involved (Monsanto, Biotechnology Industry Organization or Syngenta) an edge. Again, the White House protecting corporate interests. 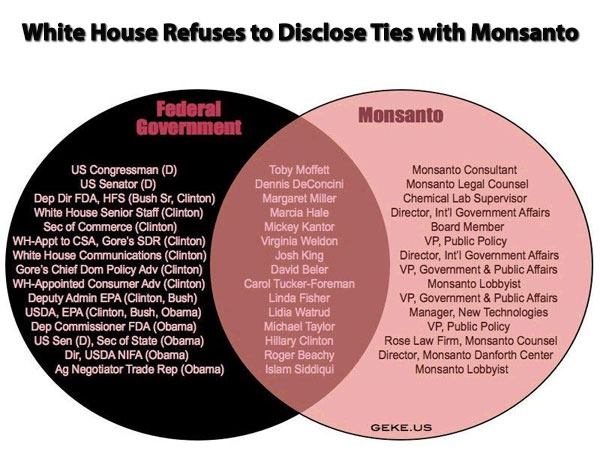