Because we’ve pretty much run out of major appliances to break down here at the House of Pain, we now face a new foe. Our house is under constant attack by wildlife.

Less than 24 hours after the Snake Encounter, WCK told me she “heard a spider” in her closet. Of course, I hadn’t bothered to learn anything from the Snake Encounter, so I thought she was exaggerating. I went into her closet and I immediately heard a very loud, very scary “scratchy scratchy” noise. I would find out in a minute it wasn’t really a “scratchy scratchy” noise; it was a “flappy flappy” noise.
Our house has a crawl space that we use for storage. The entrance to the crawl space is in WCK’s closet, and it’s blocked off by a large piece of wood that’s nailed to the wall. I realized the “scratchy/flappy” noise was coming from the crawl space, and then I noticed an angry orange beak sticking out of a crack in the wood.

There was a beak in my house! A beak! If you don’t think beaks are scary, you have never seen one pointing at you accusingly from your child’s closet.

All I saw was the beak, but I’m pretty sure the rest of the animal looked like this: 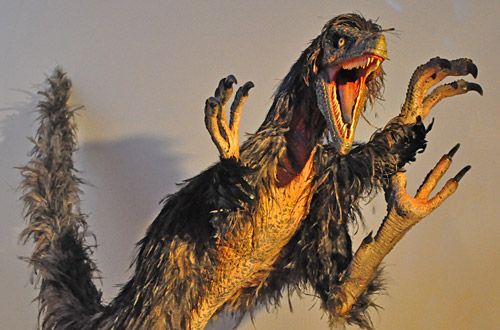 WCK and I immediately fled the scene. Fortunately, Jay was home this time, and I told him he needed to get the bird/velociraptor out of the crawl space. Clothed in protective gear (hat, gloves, goggles) and armed with a tennis racket, Jay entered the crawl space and found … nothing. He then went up to the attic and again found nothing. Either the velociraptor made a quick getaway or it was huddled in the corner, breathing quietly, wearing an invisibility cloak.
With our luck, I know it has to be the cloak, which is probably also hiding a few dozen hissing cockroaches and bats. Just wait.