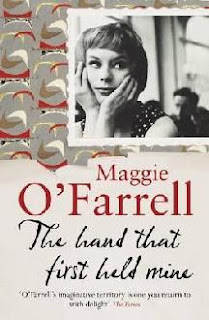 No, I haven’t stopped thinking about my holiday. Another week would have been nice, but, hey, I have a job to keep going!

As it happens, I have most of next week off, but it will be spent at home. The Boy is coming to stay (with His Girl) and The Girl returns from London. I will have a full house and I will have to buy and cook food – lots of it! And I need to weed the herb garden. Calling it a “wildflower meadow” only works for so long ; )

Oops – got distracted! This is supposed to be about What I Read last week.

The holiday cottage had a small bookshelf. There was a copy of “What I Loved” by Siri Hustvedt! That felt strange – like finding an old friend in an unexpected place! But nothing else appealed.

Luckily, I had my library book: “The Hand That First Held Mine” by Maggie O’Farrell. It turned into one of those compulsive reads. I had been dipping in and out for a couple of days when I realised that I needed to swallow the rest whole and digest it later. FL was asleep, so I curled up in the sun porch and read and read and read until I was done. I may have stopped for chocolate.

I then texted my daughter and told her to get a copy for her Other Grandma (OG), because she MUST read it! I feel a bit sheepish about that now, but I think OG will understand. A fair portion of the novel is set in London in the late 1950’s / early 1960’s and it reminded me so strongly of the bohemian community that OG describes drifting in and out of at that time. And when it became clear that some of the “characters” were real people, that connection felt electric. Did OG know any of these people?!

So much of the novel is about memory and the details that fall between the gaps. Things you don’t realise are significant until years later, when it’s too late to undo the course of events. How a photograph can be a candid snapshot of a moment or a deliberately “composed” image: and sometimes we don’t know which we are looking at.

There is a parallel narrative, set in the present day, concerning a young Finnish woman artist coming to terms with the birth of her first child. I loved this character! I absolutely “knew” her, and loved her for wearing striped tights with the feet cut off and a “looped hem dress”… and meeting “incomprehension” from other more conservative mothers. Oh my! Been there, done that! The passages describing Finland might have been written by Tove Jannson.

It would ruin the novel if I were to “tell you the story”. Suffice to say, the plot gathers momentum, and the reader is thrown backwards and forwards in time with flashbacks and more leisurely descriptions of time and place, carefully edited together. Cinematic? Yes, deliberately so, with a nod to the main male character who is a film editor.

When I finished reading, I was in tears. I found it emotionally draining, and yet uplifting. This novel probably won’t win any literary prizes… but I know that I now need to read everything else that Maggie O’Farrell has written, because her style pulls me in to a fictional world, and makes me reflect on my own reality. Who the hell am I? Where do I belong?

And where can I buy stripey tights? ;)