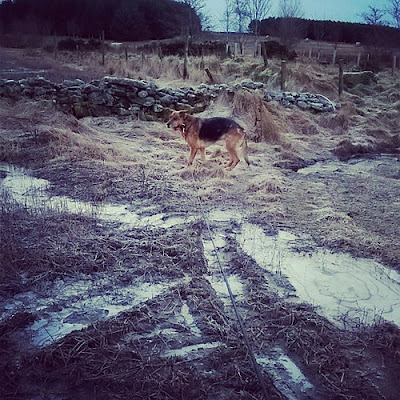 Today was one of the hardest days so far.
I felt like I was driving my love to the scene of his execution.  He was very reluctant to leave the house and could not bear to acknowledge the dog as he went out of the door.  I thought he would regret it if he didn’t, so prompted him:  “Ha!  Goodbye dog!” he said gruffly.  And as we drove out of the farm road I caught him taking in the view of Bennachie, sidelong, in case I noticed.  In case I thought he was looking at it for the last time.
Which he probably was.
I don’t think I have ever driven with such care and attention.  The roads were icy, on top of recent flood water, but we made it safely.  We got the last space in the tiny car park.  The receptionist showed us to his room:  he has his own room there, with a lovely view of the garden.
We waited almost an hour before a nurse came to talk through the admission form.  In that time, he tried to say the things he needed to say to me, but was stumbling over the words.  “Don’t worry,”  I said “There’s no rush!”  “But I’m on my way out!”  he said.  “Like I said – there’s no rush… you’ve got all day!”  I replied, which got a laugh out of him.
The admission form was the usual stuff about the size of our home and whether there were stairs, and his recent medical history.  And somewhere in the middle of it, I started to panic, in case we were about to be told he was a fraud and how dare we take up a precious space in the hospice, when other people were in greater need!  But it wasn’t long before he started to fall asleep halfway through a sentence, and for obvious waves of pain to pass across his face.  The nurse had to leave twice to administer medication to other patients, and on her second return we agreed that I should answer the remaining questions, to let him rest.
We were given a leaflet setting out the facilities available to him in the hospice.  He smiled to hear that ice cream is available in place of standard meals, if that is all that he can bear to eat.  This had already become my substitute offering when the mere thought of healthy eating made him wince!  And he brightened up quite a bit when he heard that there is a writer in residence, whose sole function is to help patients get their words onto paper.  I persuaded him to bring his book project with him and now he will have the chance to share it with a “professional”.  Truly fantastic news!  The burden is no longer mine alone :)
His lunch came at noon, and I was asked to go to the visitors’ room where there was tea and coffee available.  When I got back, he was asleep with his head on the table.  He had eaten only a little, but he had tried.  I carried on with my knitting.
At 2pm, the doctor arrived with another long list of questions.  But she had lots of good answers too:  ideas to adjust his pain medication, to give it as a liquid rather than a pill;  a nebuliser to help clear his chest;  a drip to rehydrate him, now that swallowing is painful.  She really listened to him, giving plenty of time for him to try to explain exactly where the pain was situated, to talk about how hard it is to eat and drink, now that everything tastes like medicine.  And this is the crucial difference between hospital and a hospice:  life is conducted at an entirely different pace.  FL is at last being given the time he needs to try to explain how he is feeling, without people snatching the words out of his mouth and forming their own conclusions.
But it exhausts him to think about his body and how he feels.  At one point he asked to be excused to go to the toilet.  I helped him through, and returned to talk to the doctor.  I checked on him at ten minute intervals, and I am pretty sure he was asleep every time I went through.  It was round about then that I realised that the young doctor had tears in her eyes.  She said it was lovely how calm and patient I am with him.  Oh me oh my, that’s when I lost my composure.  Far from them thinking I have been over-reacting to his condition, they totally understand and agree with me:  FL is in a really bad way and is finally in the right place to get the personalised care he needs and deserves.  And I can’t bear for that to be true.
Talking to the doctor about how things have been, she told me that his latest blood tests show that his kidney function is deteriorating.  This is the critical factor in the prognosis for a patient with Multiple Myeloma.  She said that he is very frail now… and asked me then if we had thought about whether or not he would wish to be resuscitated in the event that his heart stopped.  And although I know it is a question that has to be asked, it was suddenly absolutely clear to me that he won’t be coming home again.
She was incredibly kind and compassionate.  Everyone we met today was the same.
I stayed until 3.30, when I left to beat the rush hour and to see to the dog.  Hero had been through the recycling bin again and there was a pile of shredded paper on the floor.  He was very glad to see me, and relieved that I wasn’t mad at him.  But he was looking everywhere for his master.  Poor dog.