My monthly blood test results for January, show that my cancer levels/m protein have increased from between 10 and 11 in December up to 13 in January. I began Ninlaro chemo with my Pomalyst chemo on January 8th, however, it may be early to see the effectiveness of both chemo. Or looking at it from a positive perspective, if I wasn’t on Ninlaro, perhaps my levels would have spiked to 18 or 20. I have noticed this new chemo has increased my appetite as well as my level of fatigue.

I remain hopeful that February’s results will improve.

Photo: Friday afternoon I headed to Stanley Park to take a photo in the forest. I wanted to express the challenges of chemo side effects, through the act of balancing with one foot on a rock. An ordinary task that seems simple and easy, actually isn’t. I am reminded of this when a tourist asks me for directions. I find that I will babble and give a convoluted response forcing me to recommend they ask some else for assistance. 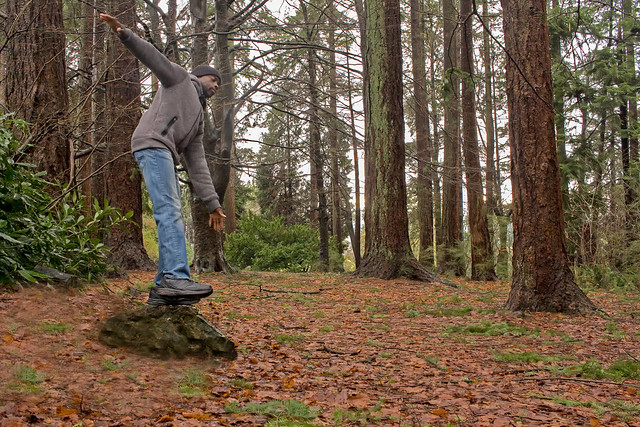 To recap: On Sunday, January 28th, I completed Cycle 39 Week 3. I have multiple myeloma and anemia, a rare cancer of the immune system. Multiple myeloma affects the plasma cells, a type of immune cell that produces antibodies to fight infection. These plasma cells are found in the bone marrow. As a blood cancer, it is incurable, but treatable. Since February 9th 2015, I have been on Pomalyst and dexamethasone chemo treatment (Pom/dex). On July 16th, my dexamethasone treatment ended, due to eye damage, reported by my Glaucoma Specialist, from long-term use. On January 9th I began Ninlaro chemo to combat steadily rising cancer levels.