My m protein value is my cancer levels marker. Think of it as the amount of myeloma/cancer in my plasma cells. Plasma cells are white blood cells used to fight infection. That’s why multiple myeloma is a cancer of the immune system and also called a blood cancer. If my m protein is 0, then no cancer is detected in my bloodstream.

In Feb 2015 when I began treatment – Pomalyst chemo + dexamethasone, the value was 36.1. So my cancer levels dropped initially and then stabilized between 2 and 3 since that time. The actual m protein value isn’t so important really, what is key is stability, because that means the chemo is consistently working.

This news isn’t good as health issues are common with my disease, as well as more prevalent with higher cancer levels. In January, I will see my Myeloma Specialist to discuss further treatment options.

My Hematology profile (how my body responds overall to being on treatment) looks good. 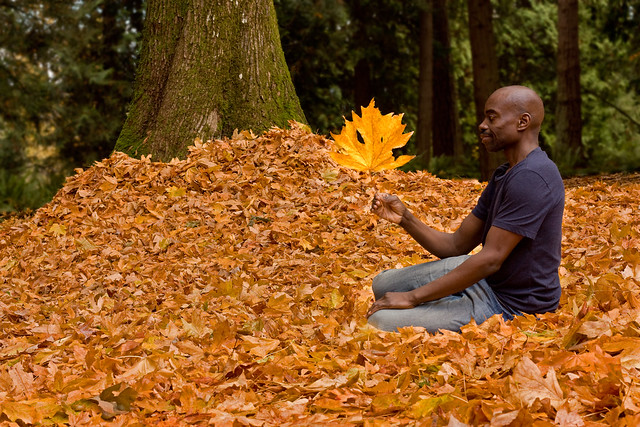 Self-portrait:
This was my second attempt at this location in Queen Elizabeth Park. On Tuesday, I spent time here, creating the setting and taking pictures. However, when I got home, I was disappointed with the final results. I realized that I had rushed the shots, because it was unseasonably cold that day, making it difficult to think, as chemo really affects my body temperature.

I decided that if the expected rain showers didn’t occur all week, I would go back for a redo. When I arrived Friday morning, my heart skipped a beat, because the leaves were being cleaned up close by, so I didn’t know if the leaves were still there. Thankfully they were, so I focused on my photography, with a smile on my face.

I enjoyed taking breaks to watch tourists create their own memories, around the tree. Queen Elizabeth Park never disappoints – a special place for me.