Well, I’m still here. Just got back from Cape May today, and had some computer issues before I left, hence the lack of posts. I am recovered from the ablation, physically at least. It’s been a tricky few weeks in other ways. I had a couple of weird, fainty episodes, and am hoping that doesn’t become a habit. I went back on BP meds while on vacation. For some reason, my BP was really high and it could not wait until my next doctor appt. where I hoped to get a more tolerable med, since I’ve had a few reactions to this one. This 4th of July week in Cape May is always something we look forward to. We go with my parents. This past week came with some wrinkles, though. Reality follows you where ever you go.
My mom’s memory is getting worse. It’s always sad to see as things slip further from her but I had a very painful interaction with her, the first night we were there. It seems that she forgot that Tim isn’t cured, and still has MM. She burst into tears and it was like seeing a child cry. She had to go into her hotel room to collect herself before Olivia saw her(thank goodness she was engrossed in her IPOD and had the earplugs in.) My dad and Tim were just pulling into the parking lot with dinner from a take-out place. She collected herself but her eyes were bloodshot through dinner and she could barely look at Tim the whole time. VERY upsetting and not a scene I will probably ever see erased from my memory. Then, the next morning, before Tim and my dad hit the golf course, Tim told me that his PN in his feet seems to have returned the last few weeks. He said he’s had numbness and that “fallen asleep” feeling for awhile now. I intend to look up those Dana Farber supplements  and get him on them. What else can I do? SO, the 6-day trip started off with a whole lot of sad. I did my best to recover and make the best of it but my mom is shrinking her world. She did not make it to the beach even once. She is afraid of having an asthma attack. I had no idea that last year’s trip was going to be the end of an era for us with this vacation. Things change. Nothing to be done but roll with it. I have learned to “let go” more and this is what I attribute my better handling of stress these days to. Even with my ablation, I thought, if it’s God’s plan to take me outta this world, not a lot I can do about it. 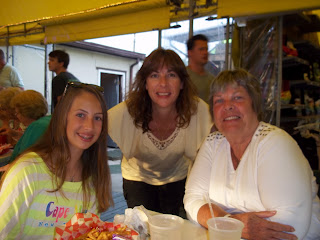 Life is not easy and getting old definitely ain’t for sissies. I feel awful for my mom. This was her worst nightmare. But, we just have to deal with it the best we can. Some days, it gets really hard to find those silver linings and blessings. Too much tough stuff going down these days. I feel like I am forever picking myself up, dusting myself off, and trudging on. But, I will. Got too much to do to get all bogged down in it. Here’s hoping the rest of the summer has some good times in store. I sure could use some.