Since last I wrote, another pair of Arne and Carlos Regia socks has fallen off the needles.  I squeezed His ‘n Hers socks out of 100g of self patterning yarn, plus 50g of plain red.  Bargain!
I am saving FL’s pair for Christmas or a time of great need, whichever comes first.  The jury is out on the more likely of those two scenarios.

This left a sock-shaped vacancy on my needles, so I decided to cast on a pair of knee high colourwork socks, Talia by Rachel Coopey.  I probably managed two rows in the Waiting Room on Tuesday before I got bored of knitting 104 stitches in twisted rib on 2.25mm needles.
This does not bode well! 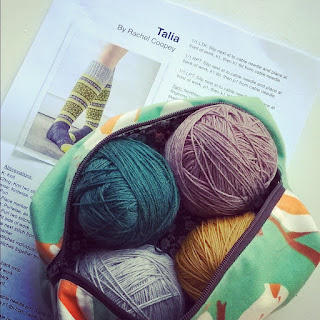 So perhaps it is just as well that I have been struck by an unnatural obsession with another knitter’s cardigan, to the extent of emailing her to ask for a custom dye of matching yarn, so that I can be her Northern Scottish twin.

This is what comes of a recent bout of binge-listening to UK-based podcasts.  It led me into a rabbit warren of links:  Curious Handmade, ShinyBees,  the Wool Kitchen,  East London Knit… on and on I burrowed, until I fell upon Helen’s version of the Angelus Novus cardigan by Renee Callaghan.
GASP!  It shall be mine!!!
And lo, it shall indeed :) 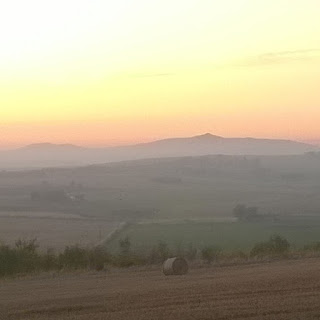 The doctors are still pondering what best to do for FL.  He has 12% myeloma cells in his bone marrow (bad, but not as bad as it could be). However, the main problem is that his blood cells are “dysplastic”.  I understand this to mean that they are not regularly replacing themselves with healthy new cells. Instead, the proportion of dodgy dud cells is increasing, making FL less able to fight infection and less able to cope with chemotherapy.

So, although there is an intravenous  chemo drug called Bendamustine (forever lodged in my brain as “Bendy-Bus”) it is far too toxic for FL’s system to cope with, so is off the menu.  There is another called Idarubicin, which can be taken in tablet form and they are considering this one.  However, a cursory Google search tells me that 9 out of 10 patients experience a wide range of side effects including vomiting, exhaustion and generally feeling terrible when taking this delightful drug.  I honestly think they will have to rule that one out on the grounds of reduced quality of life.

Which leaves us with…?
The doctors have no other ideas at the moment, other than to give FL a steroid boost.

So this week FL has 4 consecutive days of Dexamethasone to look forward to.  He is still taking Pregabalin to try to combat the nerve pain, but it doesn’t seem to be making any difference yet.

We go back to the hospital in another 2 weeks for the results of his latest Freelite test, to see if the Myeloma is sneaking up on the outside lane in the dark with its headlights off, since there is nothing to stop it.  They still haven’t ruled out going back to Pomalidomide, but I would be surprised if they manage to justify it to the NHS funding panel.