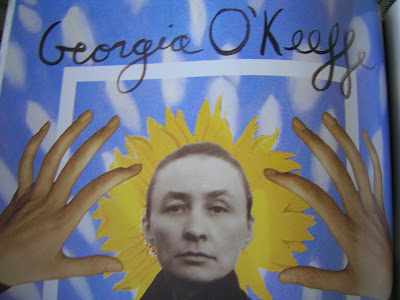 On Friday evening, I got the dinner going and switched on the tv in the hope of some distraction… and hit gold!  A freeview channel I had never heard of was showing the film Georgia O’Keeffe.  Despite Jeremy Irons’ comedy moustache and rather a lot of lingering heavy breathing, it was a visually stunning film.  And the costumes!  I had no idea that Georgia O’Keeffe had such a strong “look”.  I knew only of her paintings.
By complete coincidence, I recently bought a copy of Lone Wolf magazine, just to see what it was all about.  In it, there is an inspiration piece about who else but Ms O’Keeffe, and it mentioned that she “was an expert seamstress”.  Really?  I needed to find out more!

Some recollections from Ellen Bradbury Reid, who shared a personal bond with Georgia O’Keeffe in her later years: (source)

“O’Keeffe never wore sunglasses because they changed the color of things. She wore big brimmed black hats. She made or had all her clothes made. She always made her own clothes, even when she was a small girl. When she was at Chatham Academy, an Episcopal girls school in Virginia, she would wear very plain simple dresses. Most of the Chatham girls were from the South and had lace and pretty bows on their dresses, and they longed to dress O’Keeffe up…but she resisted. She once said that if she had to figure out what color to wear each day it would be a waste of time. As a young woman she wore black, brown, and white, but as she grew older she wore only black and white.
O’Keeffe had many patterns for dresses that she saved and reused for years. Most of the dresses were cut on the bias and had batwing sleeves so that they moved beautifully and were comfortable. Once when she was older, her friend Juan Hamilton had a dress made following one of her standard patterns but in a mauve, plum color. O’Keeffe refused to wear it and gave it back to the dressmaker.”

And this is from Portrait of an Artist:  A Biography of Georgia O’Keefe by Laurie Lisle:

“For years Georgia had stitched most of her simple clothes out of the finest fabric, often sewing when she wanted to think. She made luxurious white silk blouses, white cotton nightgowns with white embroidery, and petticoats edged with white lace. In cold weather she donned a black wool coat with a collar that buttoned up to her chin and black gloves of the best leather. At one time, she sported a pair of black bloomers under a tentlike black tunic. Throughout the years, when asked the reason for her monotone clothing -odd for a painter- she gave several, all with some truth to them. Once she said that if she began to choose colors to wear, she would not have time to pick any to paint. Another time she explained that she was so sensitive to color that if she wore a red dress, she would be obliged to live up to its flamboyance. She claimed she liked being cloaked in anonymity. “There’s something about black,” she remarked. “You feel hidden away in it.” Deadly-serious black also served to transmit the message that she was not to be treated frivolously or flirtatiously. Also, she must have realized that if her clothes were one color, they would match and she would achieve a look of maximum elegance with a minimum of time and money.”

This is all so tantalising!
Across the web, I find references to her “parson’s hat” , the monochrome aesthetic, her somewhat androgynous style.

I don’t see myself adopting a uniform of black and white anytime soon, but how tempting it is!
I imagine a modern-day O’Keeffe might shop at Me&Em or Toast.

But what would she sew?  What patterns would she use?
What patterns did she use back then?
Oh wouldn’t you love to get hold of those?
“Bias cut with batwing sleeves”?  Yes please!  Wow!
And let’s note:  she may have painted exuberant exotic flowers, but she did not wear them.  A lesson to all of us not to be too literal in our inspiration!
And as a template for aging gracefully?  Oh yes!
There is more on that topic, referencing Georgia with some great pictures here.  Go, read it.