On December 29, it will be two years since I was in the University of Washington Medical Center Hospital having my stem cells transplanted.  It is such a vivid memory that it seems impossible that nearly two years have passed.

When I was released from the Seattle Cancer Care Alliance at the conclusion of the two and a half month transplant process, I had an exit conference with the attending doctor.  It was a somewhat disheartening consultation because of this part of the final report:

She does have a history of translocation 14;16, monosomy 13 and 17 on cytogenetics of myeloma cells…The problem is with high risk cytogenetics, patients do not tend to have very long durable remissions after autologous transplant, usually it is only about nine months to a year on  average and then their disease comes back…therefore, it is reasonable to consider maintenance therapy.

Nine months to a year?  I knew that was an average and that it was based on history, but I felt quite discouraged at the time.  However, as I continued to recover and improve, I thought less and less about this bleak possibility. I did go on to have maintenance therapy using Velcade for six months and it was successful.

Now, it is two years later and I am still in remission with just that pesky lambda light chain beginning to misbehave.  Even with my high risk cytogenetics, I am on the long side of the average.  I’ll take it! 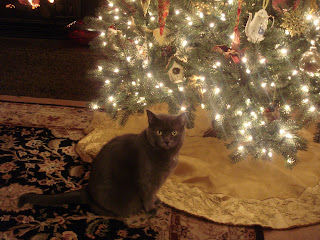 Lily and Her Christmas Tree