Skip to content
You’re fireproof. Nothing breaks your heart. You’re fireproof. It’s just the way you are. You’re fireproof. That’s what you always say. You’re fireproof. I wish I was that way.
Fireproof – The National
Tuff *. An exhortation on determination
Yesterday I was signed off from the physio I have been seeing since September. I’m going to be referred on to another gym group, so I’m not out of the system just yet, but it’s a major step, nonetheless. Another milestone, just in advance of a string of rather odd anniversaries which are to come over the next few weeks.

Since the musculoskeletal components of myeloma get under-reported in comparison to everything else, I feel it is a personal mission to write this stuff up. So here comes a potted recount of my physiological fitness over the last 2 years. Some of you know much of this all too well.

2012: March: The terrible crunch in my back that stopped me in my tracks. May-June: Increasing problems with walking, and particularly standing. July-Dec: Bone pain and chemo fatigue. I sat as much as I could. And slept propped up on pillows. I was slowly curling up. I avoided the need for a zimmer, mainly by using Lyndon’s buggy as a substitute.
2013: Jan: Couldn’t stand straight, or for long. Lingering pain, despite my myeloma being in partial remission. Feb: Verteborplasty released me from much of my pain, and most of my painkillers. Mar-May: Mostly lying down, really on account of my SCT. I suspect I was getting even more crooked, though I was too crook to care. Jun: Beginning to get a horrid realisation of the kyphosis I had developed. And beginning the fight to overcome it. Back on painkillers in order to begin to push my back back in to shape. Jul-Aug: Out and about, proving to myself that sitting in front of a PC is a major source of problems. Fighting to get flat, often experiencing really quite painful grinding sensations in my lower back as the bones realigned. Sept: Finally (finally!) seeing a specialist physio. She goes up in my personal NHS Hall of Fame for what she has done for me, in the ensuing 4 months. Oct-Dec: Continuing, determined, stretching routines. Measurable progress on every appointment. My head getting further back as I stand against a wall, until eventually I can touch the wall. Though I still need to be able to do so with my chin tipped down not up. My arms getting further down the wall when I stretch each side in turn. This second part is a reflection of me gradually gaining some rotational flexibility.
2014: Jan: Here I am. My upper (cervical) spine kyphosis is not quite corrected, but it is getting there. My mid (thoracic) spine pain is gone. (One’s thoracic spine doesn’t have much movement). My lower (lumber) spine is slowly turning back from kyphosis to lordosis – i.e. going the right way out – and I can begin to tilt my pelvis properly. I’ve got some rotational movement, and it feels like more is coming. My remaining muscular pain is diminishing and confined to my lower abdomen, my groin and the band across my lower back. I have been running, twice, without pain – which is proof, really, that things can move much as they should. I can swim 1km. I can ride a bike. I can walk miles. I can stand for a good hour or two before it gets really painful. I can carry luggage. I can get in a canoe. Though I think riding a horse was a bit much. 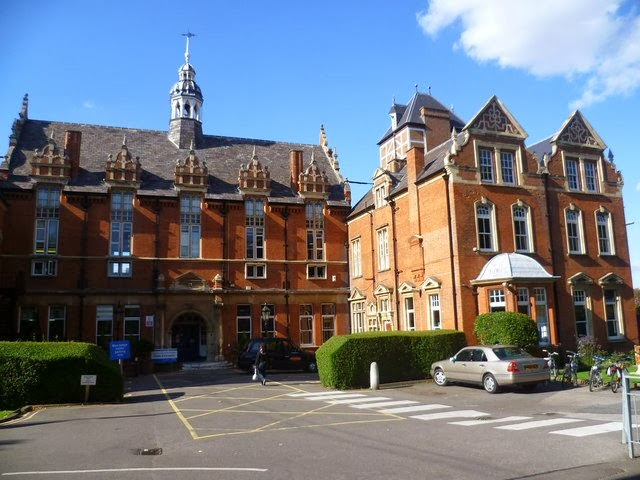 Dulwich Hospital, the unlikely scene of my salvation
I’m not quite what I was. I never will be. But then, I’m the wrong side of 40, and a bit of downhill is inevitable. And considering how many fractures there were in my back, I’m pretty delighted with where I am. Plenty of people comment to me right now that I look much more upright than I have for ages. I suspect I have regained a bit of my lost height, though I’m too chicken to find out. I’m certainly more and more mobile. And in less and less pain.

When I thanked my physio for all she has done for me, she told me that my determination has been an essential factor. I’m not saying this to show off (though I do feel quite pleased with myself about this), but because it is so easy to despair with myeloma. It (and its treatment) promises so many symptoms and consequences: pain, fractures, infections, anaemia, thromboses, calcemia, neuropathy, fatigue, kidney failure, memory damage. Oh yeah, and recurrence and death. It’s pretty easy to want to give up. Myeloma isn’t the only vile disease in the world (I have particular loathing for MND and MSA too, having seen what they do to people I love), but it’s right up there.

But, if you recognise my description of my experience as similar to your own, don’t give up. Never give up. Every day is a chance to “Get up. Dress up. Show up.” And Amen to that.

* For a change, instead of a song lyric, here’s a quote from a book, The Outsiders. Those of you not brought up in the 80s probably don’t remember the Brat Pack film adaptation…
“Tough and tuff are two different words. Tough is the same as rough; tuff means cool, sharp–like a tuff-looking Mustang or a tuff record.”