Charito went out last night to a friends house for a birthday get together. 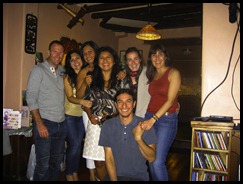 I was at home on the computer in my office (spare room) when the rain started. It sounded really heavy, so I had a look out of the window and sure enough it was coming down really hard. I’ve seen rain as heavy before so I wasn’t too worried.

I thought about Charito looking out at her party; I’m sure she has never seen rain like it. It turns out though, she was oblivious to it raining while she was with her friends. That is until it was time for me to pick her up.

I got a phone call at about 10:15pm asking me to pick her up at 11pm. No problem I thought, I went out to the car to set off and the rain had eased off to a drizzle again. It had been raining heavy off and on all night. I arrived at her friends house and it had just started raining again.

On the way home down Sealand road (aptly named) it just got worse and worse. It was raining so much that I had nearly come to complete stop as visibility was zero. Some cars had stopped altogether, but I, like others were taking it very slowly. Charito was a bit scared and to be honest it was pretty frightening. I have never seen rain as heavy as this, it was as if someone was just pouring tons of water from the sky all over the roads and cars. The wiper blades were going as fast as they could and I still couldn’t see anything. I thought about the houses near me in a place called Saughall. The last time I had seen anything like this amount of rain coming down, the houses in Saughall were flooded with the water rising higher than their front step leading into their house. I still don’t know if that was the case last night, as I haven’t seen any local news.