Have you ever had word-finding difficulties?
Where you know what you mean, but you just can’t identify the right word?
My go-to substitute is “cauliflower”, because it is such a ridiculous word in itself.  Much better than “thingy” or “wotsit”.
My poor dear FL has been utterly lost for words this week.
He can barely speak now, as his throat is so tight and dry.  Sign language is helping with simple requests:  “I need to lie on my side now” is a tilted hand gesture, and rounded fingers lifted towards his mouth indicate the need for a drink.
But he had me foxed this afternoon as he pointed soundlessly towards… what?  Where?  I made at least a dozen suggestions, all of which met with a frown and closed eyes.
After taking a sip of water he managed to croak:  “Toilet… dishtowels”.
Oh lordy, what did that mean?  Did he want a pee?  A heat pad for his sore ribs?  Something to do with water?  Pillows?
The nurses tried too, until he gave up in frustration.
And then the penny dropped:  “Tissues?”
He smiled – yes!
Who knew?!

It had been another bad night.
It has not escaped my attention that he really struggles at night.  It is dark and he is alone with his morphine-induced nightmares.
He told me he missed me when I was gone.  There was no mistaking those words.

When I arrived this morning, the Consultant was with him, listening to the few words he was able to squeeze out and agreeing with him that there is no need for him to be in pain.  They had tried reducing his dose of Hydromorphone overnight, with bad consequences.

The Consultant explained to me what I already knew:  that he is no longer eating, and drinking is painful.  As his ability to swallow reduces, they will have to administer his pain relief through a syringe.  Food is no longer offered in an attempt to sustain his life, but as a comforting gesture, to make him feel cared for and nurtured, with no real expectation that he will manage more than a tiny taste of something very soft and smooth on his palate.  They had tried mixing his pain medication into a spoonful of yogurt, but he could not get it down.

I know that he is absolutely worn out and weary.  He cannot change position in bed without assistance.  He cannot reach for the drink at his side.  He cannot stand up without the support of two nurses.  He is defeated.  It is unbearable.

So when it comes to be time for me to head home, I try to make it a lighthearted parting:  a gentle kiss, a silly dance to the door and maybe even a chorus of  “So long!  Farewell! Auf Wiedersehen! Goodbye-ee!”  But it is so hard.

Today as I was leaving he whispered, pointing:  “Tablet?”  and by a process of elimination I understood that he wanted his watch.  As if knowing the time will make morning come around that little bit faster. 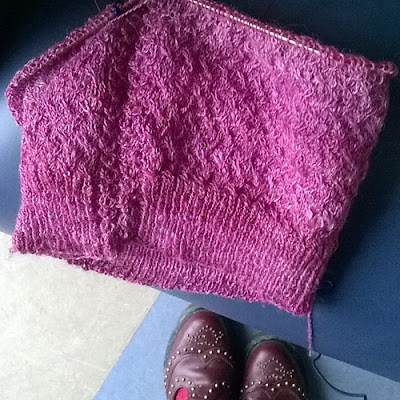 Today I dedicated myself to my handspun Qwist hat.