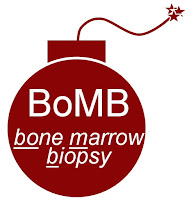 Thought you’d be as delighted as I am to know I’m going to have a bone marrow biopsy on Monday!

Hopefully, I’ll also have a lung function test, another MRI and an echocardiogram. After which, all systems go for treatment!

But only one of those appointments fills me with dread.

They have not offered me any sedation. They never do, though if I insisted on it, they’d have to provide it. But that would require another member of staff, and things are stretched enough as it is. Anyway, there isn’t any gas in the little room they use. So if you are to be sedated, it has to happen in the main treatment space, i.e. in public rather than in private. I’m not sure which is worse. At least in private, no-one can hear my screams.