It breakfast time. A Sunday morning breakfast time no less. I knew this long before somebody physically walked in to my room to to let me know it is breakfast time at all, because of the din they make outside whilst dishing up and not because I have the body clock of somebody permanently located in Beirut and found myself naturally hungry.

Anticipating many people getting round to seeing this later in the day, maybe after they have enjoyed their own Sunday brunches (in my head midday is a far more acceptable time for the first meal on a Sunday than 08:15hrs), can I recommend that you do not view it with or just before food? Consider this a health warning. I do not have the money to be sued. For, on this Sunday morning, I am writing to you about thrush. My very own oral thrush to be precise.

The possibility of something going wrong with one’s gob post chemotherapy is pretty high. So high in fact, there is a reference to it in an episode of Sex and the City and we all know how revered that show once was and therefore it is a fact most accurate, no? None of my three chemotherapies for Transplant Number 2 required ice lollies, but as with all other post IV chemotherapy I have had, as a precaution, I was given mouthwash to use. Crucially and this was my downfall, bar the the First Transplant the Actual First, when I did get some dryness and soreness, giving me the slimiest voice for the radio; I have never experienced the mouth ulcers I understand one can get from their chemotherapy. These mouth ulcers, I understand, are not the cancer equivalent of an unwanted spot by the why, in some cases they can compare with hair loss and are often treated by the morphine. I still find this difficult to be true but it is.

And still, despite knowing what could happen, I became complacent. When I was given the first mouth wash on Day -6, which required mixing two separate salty ointments in a glass,  swooshing the combined fluid around my mouth for 60 seconds and then discard. For four times a day.  I do not know if I suffered some sort of trauma during my childhood, but there is no way I can gurgle anything for more than half a minute in my mouth. When I attempt to do so, my  cheeks feel like they are going to explode and I almost always become so close to gagging that gagging is the reason for me spitting.

My name is Emma Jane Jones and I am bad at mouthwash.

Despite my complacency, I thought to myself, make a compromise, do two swooshes a day instead of four. I had enough on my plate. And when I was sick, would that mean I would have to endure it again? I am not sure how many I actually did take but I know there are currently a few boxes of the stuff on my windowsill at home and I have been  showing what as a child I called a ‘Geographical Tongue’ since last Tuesday. Geographical because the fungus grows like a map. God, I used to love showing it off.

On my transfer from the day ward on Wednesday, it took well over 24 hours to get hold of a mouth wash again, but this time,  I was no longer on salt water. I was on Diffram. Nothing tastes worst than Diffram. Diffram ruins whatever you eat for the rest of your life. I tried to get then to take it back, to revert to the salt water, but I was told it was too late. My mouth had gone too far. Not only am I on the luminous green Diffram four times a day, but I also gave to take four doses of a mouth drop that taste like something you would likely find at the bottom of a certain sort of elderly lady’s handbag.

It’s all my own doing, however, I know this and I cannot complain.. At the moment it feels like there is a furry film covering my entire mouth, unless I use the Diffram straight after brushing my teeth in which case, it feels like I have salt and wounds and they are becoming one in my mouth. My mouth is surrounded by some dry flaky skin that used to be my lips.

Like I said, I’m not complaining. I should have used all the mouthwash. If I had used it all and result was  the same, I’d be less angry because at least I would know I had done everything I was supposed to. One cannot rewind the clock and if I could, I definitely would not rewind it for this, so I am letting the eight year old me exhibit for a little bit and ask innocently, would you kiss a mouth like this? 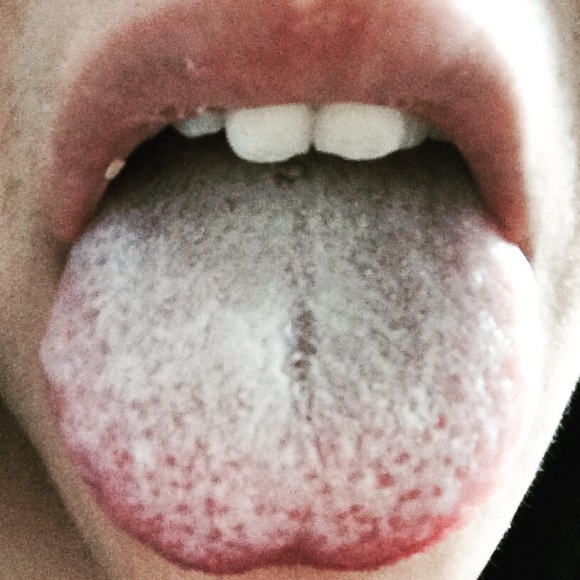 A resounding ‘No’? Okay then.