Living in Ann Arbor with a strong tie to Michigan Football is both a blessing and a curse. I love to talk about The Team, The Team, The Team, but it can be tiring reminding fans not to worry about close scares like the games against Akron and UConn, undoubtedly two of the worst teams in FBS college football. This is part of the journey.

Worry not Michigan fans, but be patient. The road to a Championship is not easy, and there will be many mistakes and close calls along the way. One of the most critical factors in being successful is knowing the end game. With Hoke, it’s been made very clear and simple, win the Big 10 Championship. A few of my teammates congratulated Coach Hoke after the Sugar Bowl win and a 11-2 record after his first year. His response, “Don’t congratulate me until the team has reached it’s goal, and that’s win a Big 10 Championship!” Below is a picture from last weekend where my 2003 Championship team was honored. Next to me is Coach Carr, who apparently still has some hops left! 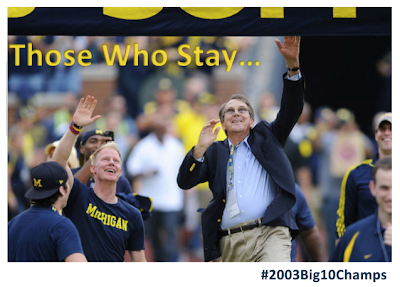 When I was diagnosed with Myeloma in 2008, I quickly returned to my Michigan Football indoctrination which occurred over a five year span. I didn’t just want to win the 2000 Orange Bowl or beat OSU, I wanted to win The Championship, which at that time and still is a cure from this disease.
Great news came over a year ago when I finally got a negative test result, my body was free from the disease at last. OSU had been beaten, The Championship seemed near and almost inevitable, we now just had to stop the chemo and hope for the same negative test results for 6-7 years.

The week after the Akron game I got a phone from my wonderful nurse practitioner. I was caught a little off guard because she doesn’t typically call me to give me my lab results. She began to share with me that the blood test came back with a very small trace of M-protein, which is an indicator for Myeloma. Wow, I really didn’t know how to respond. I was quite shocked to get the news.

After talking it over with Cassie, we decided together not to get discouraged. I now recall the scare against Akron, then UConn. This was similar, but much more personal. So what does this mean for me? Absolutely nothing as of now. Rather than wait 12 weeks for my next round of labs, I will be tested in 6 weeks.

Cassie and I question the results a little bit given that two years ago I had a spike of 0.1, which U of M referred to as a mono-colonal band of protein, whereas, UAMS (Arkansas) said it was poly-colonal (not MM related). Part of us wonders if this is a healthy band showing up, or whether it is truly a slight resurgence of the disease. Either way, we will have to wait for more data to know what is truly going on.

You know, winning a Big 10 Championship was never easy. It was 99% blood, sweat and tears, for that short moment 1% celebration. For my family and me, we will continue to give this fight everything possible knowing what it is we are setting out to accomplish…The Championship.