So, my M-spike had been slowly going down for months and months, and in June it hit an all-time low of 1.3. Then on July 9, it bounced up to 1.7. OK, OK, OK. Not a big deal. It’s going to be fine. FINE. It’s a lab glitch. Just ignore it. Then when I went to Mayo this week, it was up to 1.9. The first thing Dr. L said was, “Now that makes me go, ‘Hmmm.'”
You never want your oncologist to go “Hmmm.”
After we talked it over for a little while, though, I explained that my M-spike is always higher at Mayo than it is in Kansas City. (It’s true. I looked it up on my blog later for confirmation. Thank you, blog.) Dr. L said that makes a lot of sense, since the lab at Mayo is much more sensitive than your regular, run-of-the-mill, built out of plywood in 1889 non-Mayo labs. She agreed that 1.9 at Mayo could be 1.7 (or lower) back in Kansas City. So she stopped going “Hmmm” and came around to the idea that it’s not a big deal and it’s going to be fine. FINE.
And she told me what nearly every doctor has told me since the beginning: “We don’t look at one number. We look at trends.”
I know, I know. But having a complete heart attack over one number is just what I do. I’m good at it. It’s my thing. I could win an award.
So. I just need to wait a couple weeks until I get tested again in Kansas City to see if it’s gone up again from 1.7. And if it’s gone up a teeny bit, I need to wait until the next month’s test to see if it’s gone up again. That’s one of the 786,421,932 annoying things about myeloma: You have to wait around to see the trends.
In the meantime, we can all look at this photo until we feel better. And by “we”, I mean “me”. He looks like he’s casting a magical spell over the cancer cells. It’s like bad medicine, cancer cells. Bad medicine. 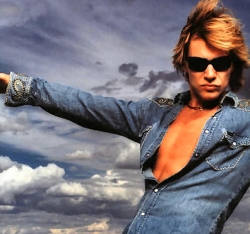 If you’re new to the blog and don’t understand the Bon Jovi photo, you can click here