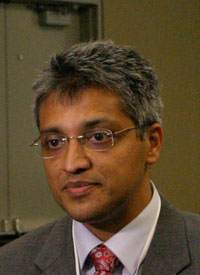 The treatment of multiple myeloma has rapidly advanced over the past 10 years, says Shaji Kumar, MD, professor of Medicine, Mayo Clinic.
“I think we have gone from a place where we could control the disease for a few years—patients used to live an average of 3 years—to now where we are seeing an average life expectancy of 6 to 7 years in multiple myeloma patients,” he says. “Changes have really happened over the past decade, primarily due to the introduction of new drugs and a more consistent use of stem cell transplant.”
These new drugs include carfilzomib (Kyprolis), which recently had its FDA approval in multiple myeloma expanded to include relapsed patients who have received at least 1 to 3 prior lines of therapy. The approval was based on results from the phase III ASPIRE trial, which found the combination of carfilzomib, lenalidomide (Revlimid), and low-dose dexamethasone reduced the risk of progression by 31% compared with lenalidomide and low-dose dexamethasone alone in patients with relapsed multiple myeloma. The median progression-free survival (PFS) with carfilzomib was 26.3 months compared with 17.6 months without the proteasome inhibitor (HR, 0.69; 95% CI, 0.57-0.83; P <.0001).
The FDA also granted a priority review designation to carfilzomib in combination with dexamethasone for patients with relapsed multiple myeloma following prior treatment with at least one therapy, based on findings from the phase III ENDEAVOR trial. In the study, carfilzomib and dexamethasone reduced the risk of progression by 47% compared with bortezomib and dexamethasone. The PFS with carfilzomib was 18.7 versus 9.4 months with bortezomib (HR, 0.53; 95% CI, 0.44-0.65; P <.0001).
Elotuzumab (Empliciti), SLAMF7-directed immunostimulatory antibody, has also shown improved PFS in multiple myeloma.
The open-label phase III ELOQUENT-2 trial, which included 646 patients with relapsed/refractory multiple myeloma, found that after a median follow-up of 2 years, PFS with elotuzumab in combination with lenalidomide or dexamethasone was 19.4 months (95% CI, 16.6-22.2) versus 14.9 months (95% CI, 12.1-17.2) with lenalidomide and dexamethasone alone (HR, 0.70; 95% CI, 0.57-0.85; P <.001). The 1-year PFS for the elotuzumab arm was 68% versus 57% with the control arm, and the 2-year PFS rate was 41% in the elotuzumab arm versus 27% in the control arm.
The FDA has granted elotuzumab a priority review for use in combination therapy in patients with multiple myeloma following the failure of one or more prior therapies.
In addition to the evolution of the treatment paradigm, the definition of multiple myeloma has also evolved, as biomarkers now allow patients to receive treatment before they would traditionally be diagnosed with the disease, says Kumar.
In an interview with OncLive, Kumar discusses how these and other changes have affected the treatment of multiple myeloma and what is on the horizon for the disease.

OncLive: How has the characterization of multiple myeloma evolved in recent years?

Kumar: The definition of multiple myeloma that requires treatment was based on if patients were having any organ damage, which typically would be shown by high-calcium levels, bone disease, anemia, or any kidney issues. We have expanded that definition over the past year to include some biomarkers that predict for the development of these symptoms. Instead of waiting for something bad to happen, we are starting to look for indications that these symptoms are going to start soon, so that we can start patients on treatment sooner.
The definition of myeloma has expanded to include those patients who have more than 60% plasma cells in the bone marrow, those who have a free-ligand ratio that is more than 100, and those who have one or more lesions on an MRI or a PET scan.
We have learned that, if you have one or more of these characteristics, your risk of getting symptomatic or active multiple myeloma within 2 years is over 80%. We decided that it is better to treat these patients earlier in these cases.

What are the most effective treatments for multiple myeloma?

The treatment paradigm for multiple myeloma has really changed over the past decade. Prior to that, it was mostly alkylating agents and steroid medications. The two major classes of drugs that are used currently for multiple myeloma include proteasome inhibitors such as bortezomib (Velcade) and carfilzomib (Kyprolis), both of which are approved, and immunomodulatory agents like thalidomide (Thalomid), lenalidomide (Revlimid), and pomalidomide (Pomalyst).
The third most effective treatment available is stem cell transplant. Patients who are eligible to go through a stem cell transplant should always be considered for one. – The proteasome inhibitors have to be given either subcutaneously or intramuscularly. They are very effective and partner very well with a variety of agents in combination. The main side effects we see with these drugs are peripheral neuropathy, especially with bortezomib, as well as increased blood pressure and some heart-related side effects with carfilzomib.
One advantage of immunomodulatory drugs is that they are all oral. They also tend to be very effective. The side effects we primarily see are a lowering of blood count, skin rash, and fatigue.
Overall, both of these classes of drugs are very well tolerated. Combinations of both immunomodulatory drugs and proteasome inhibitors are some of the most effective treatments we have for treating multiple myeloma.

What options are on the horizon for patients with recurrent disease?

Right now, all patients with myeloma will eventually have the disease recur. We have a variety of options for treating patients with recurrent disease. We have several new drugs that have come to the market, including pomalidomide. There are also several investigational drugs currently ongoing in clinical trials. The most exciting are the monoclonal antibodies. These include durvalumab (MEDI4736) and SAR650984, both of which are anti-CD38 monoclonal antibodies. Both have been shown to be effective in early clinical trials. There is also a drug called elotuzumab that targets SLAMF7. When combined with lenalidomide, it has been shown to be quite effective. There are a lot of new options out there, both approved and also going through clinical trials.

Beyond monoclonal antibodies, what immunotherapy approaches might eventually play a role in treating multiple myeloma?

There are some early reports of chimeric antigen receptor T-cell therapies showing some promise; we will need to wait and see how that plays out. There are also some other immune approaches with potential, including vaccines that have been investigated over the past few years. Some recent data suggests this may be effective.

Where do you hope to see the treatment paradigm in multiple myeloma going over the next 5 to 10 years?

Progress needs to continue to be made. There are several new classes of drugs being introduced in monoclonal antibodies and more targeted therapies, which can all be used in combination. The efficacy of these combinations continues to improve. I think we will have deeper responses going forward for patients with multiple myeloma, and responses that can be longer lasting. I believe that is the direction that myeloma treatment is going toward. It will move toward more effective regimens and treatments used for a longer period of time, resulting in sustained control of the disease. Eventually, we feel this will translate into a cure of the disease, as well.