In July, Jay and WCK and I took a week-long vacation to Branson, Missouri. We’ve lived in Missouri for 10 years and had never been to Branson before, so we figured we should check it out.

It turns out that Branson, Missouri is exactly as Homer Simpson described it: Las Vegas if it were run by Ned Flanders. But we had a lot of fun. We did. Jay said we can’t go back until he’s in his cold, cold grave, but I think that is his secret code for, “I had fun.” He said the exact same thing about the Great Wolf Lodge.

Everybody kept telling us we needed to go to some shows. I had no idea which show I wanted to see until I found out about this: 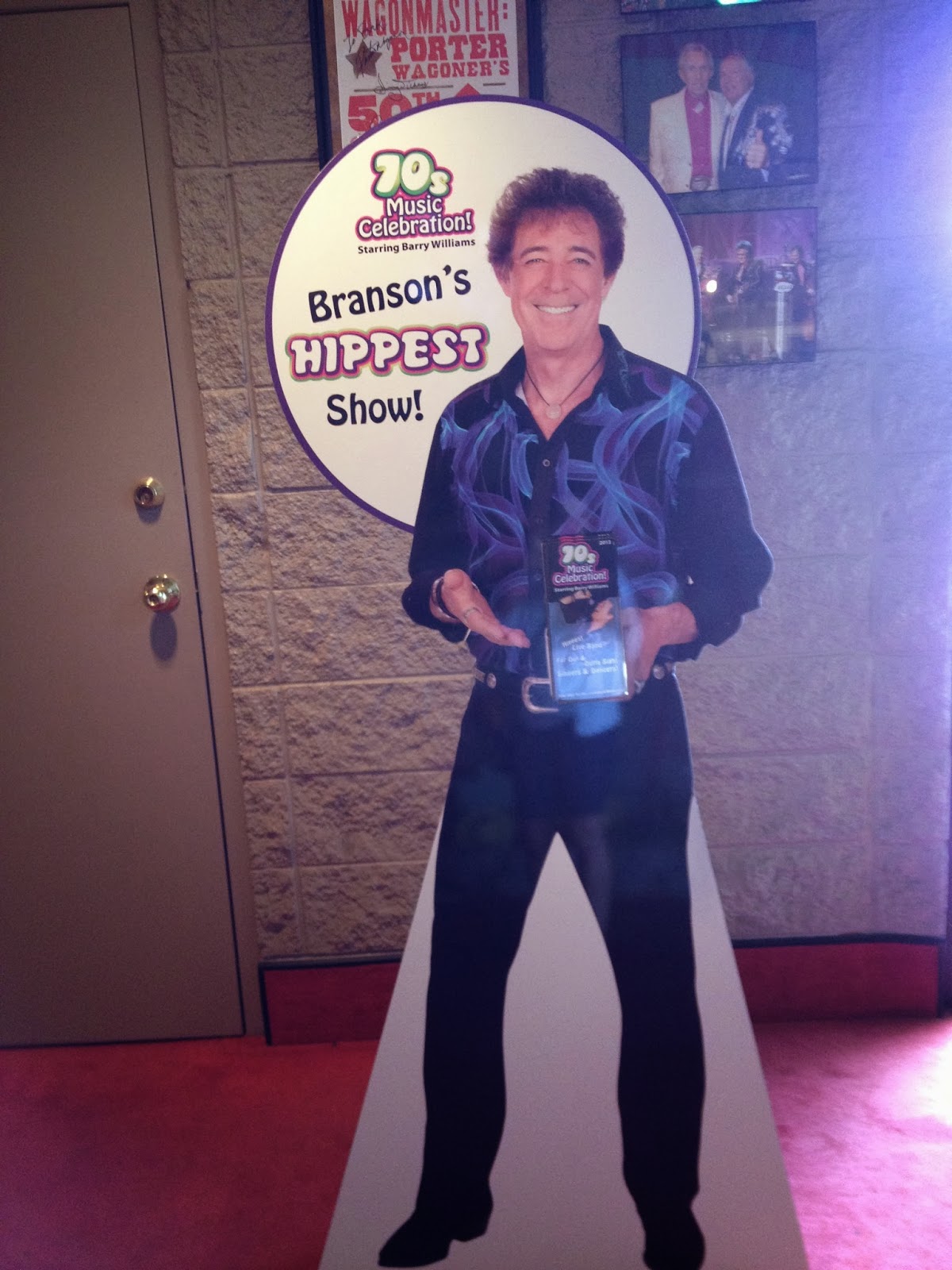 Yes!  It’s a show called “’70s Music Celebration” staring Barry Williams, aka Greg Brady from The Brady Bunch! Greg Brady! They don’t even need to tell me it’s “Branson’s Hippest Show”! I take one glance at this cardboard cutout of Greg Brady handing me a brochure, and I know that instinctively!

You see, from about 1987 to 1993, I watched The Brady Bunch every single day on TBS at 3:35 p.m. You would think at some point my parents would have insisted I do some homework or go outside or participate in some extra-curricular activities. They did not, and I became an absolute master at Brady Bunch trivia.

And so, even though Peter was always my favorite of the Brady boys, I knew that I absolutely had to go to this show and see Greg Brady. Jay and WCK were not as enthusiastic. In the end, they decided not to come with me and endured an undoubtedly boring afternoon swimming at the hotel pool and eating ice cream.

Meanwhile, I was ushered to a seat in the front row (the front row!) to watch Greg Brady sing many ’70s hits, such as  “Disco Inferno”, “Kung Fu Fighting” and “Convoy”. I just knew Jay and WCK would feel terrible when they found out how awesome it all was. They still won’t admit that they feel terrible for missing out, but I know deep down that they do.

At one point, Barry/Greg flew down from the ceiling in a Superman outfit.

At intermission, one of the backup dancers announced that we could purchase a variety of Greg/Barry items and that Greg/Barry would be in the lobby to autograph them after the show. Holy mother of God!  I rushed to the table and purchased a special collector’s edition of Barry William’s book: “Growing Up Brady: I Was a Teenage Greg”. Naturally, I already own this book, but this was the special collector’s edition. The book details the time Greg/Barry went out on a date with Florence Henderson, among other things. It is a classic, and I highly recommend it. With my purchase, I got a free copy of Barry’s CD, “The Return of Johnny Bravo.”
When the show ended, I rushed to the lobby and I was the second person in the autograph line. Greg/Barry signed my book. And then this happened:

And it was one of the greatest days of my life. THE END.

Epilogue: Two days later, I took WCK to a show called “Amazing Pets”, which involved dogs dressed as Batman riding little tiny bicycles. Jay, who has now clearly proven that he can’t appreciate good entertainment, decided not to go with us, and he went for a run through downtown Branson. Just as he was passing the restaurant shaped like a giant chicken*, he was nearly run over by, yes, Greg Brady.

I believe there is a valuable life lesson to be learned here, a lesson we can all turn to during these troubled times, and the lesson is this: If you turn down a chance to see dogs dressed as Batman riding little tiny bicycles, Greg Brady will run you over. I think I’ll needlepoint this and put it on the wall. THE END.

*I think the phrase “the restaurant shaped like a giant chicken” pretty much sums up all of Branson.