When it comes to the hospital and my appointments at the hospital, I am a creature of habit. It’s comforting for me to know exactly what I am going to do when I get to the hospital, know exactly who I am going to see and where I am going to sit. UCH’s Haematology Department has long facilitated my need for routine. I come in, I bypass the accepted booking in procedures, I go to the fourth or second floor, via the lower ground floor and I am done. Along the way, I will come across several faces who have seen mine before and are kind to it. I am made to feel special and that my pals, is because I am.

Today at the Cancer Centre, otherwise known as my office, I was in a state of flux. My routine had been altered. I was not being seen by anybody on the second or fourth floor. I was forced, forced I tell you, to check in with all the other mortals on the ground floor on self service machine. On a machine! Instead of just disappearing to a place where people can identify my clinic by my face, I had to wait on the ground floor for my name to appear on multiple large tv screens. I think I have only done this once before. Not one to voluntarily fade into the background, I decided that the best way to wait for my non-Haematology appointment was to tell anybody who knows me that I did not know what I was doing. It was not a lie as such, because I did not quite know how the clinic works, but I will put my hands up and say that I was being a little needy.

I chose not to wait for my name to appear and instead asked a volunteer to inform me of the event, so that I could sit in the air conditioned abyss that is Macmillan Support. I did not ask just the one volunteer either, I asked at least three people to tell me when my name appeared in lights. I think, I was excited about the appointment ahead of me. As it turned out, the preparation I felt was necessary, was in fact, unnecessary. The appointment system at the centre, which I chose to never follow, is rather slick, and I was sent a text message informing me that I needed to visit the first floor. 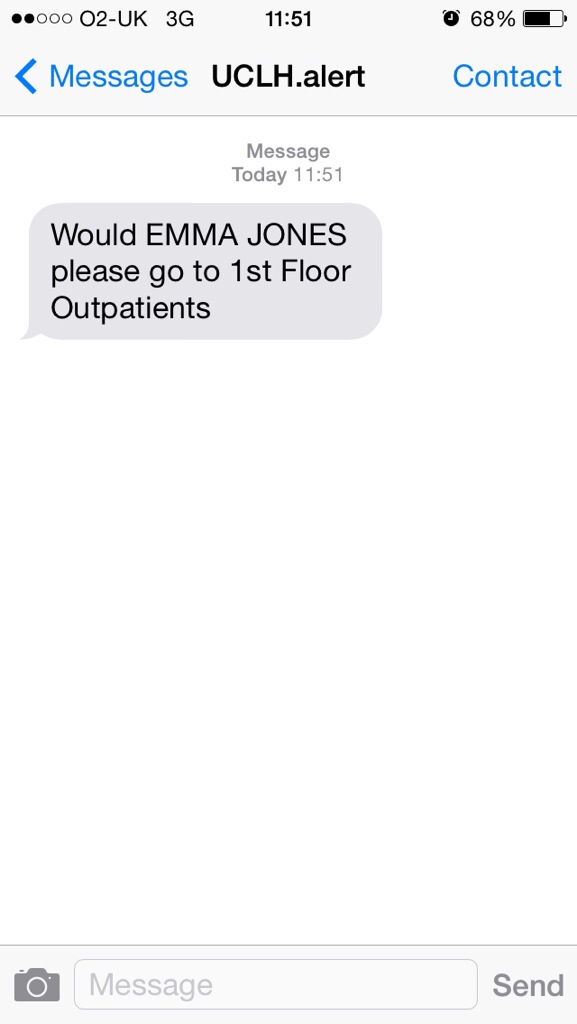 Technology is just a wonder

I will be honest, I did not like the first floor. The flooring was loud, and the other patients felt the need to monopolise the seats and bash me when they walked passed. It’s okay though, I gave them all the eye and took a photograph of the artwork. Also, and most crucially, the staff on the floor did not give me the recognition I usually attract. Again, with the special. I am special.

Trust me, this was not age appropriate

Fortunately for me, when the time came for my actual appointment, a mere 30 minutes after the initial appointment time, I got that special treatment I demand and expect. The Medically Trained Person, who specialises in radiotherapy introduced himself and said that we had not met. I was unsure about this statement, but he confidently told me that if he had met me, he would have remembered. Obviously, this made sense to me and I took him at his word.

After five minutes, it was clear to me that stepping outside my myeloma comfort zone pays off sometimes. It has taken several weeks of talking to the People Trained in Myeloma to get a referral for radiotherapy. It has been a subject that has never been far from my mind since I heard the word ‘relapse’. Even today, I feared that the appointment was just a referral and I would be told that radiotherapy would not achieve anything. I just wanted a chance, something is better than nothing has been my motto. It looks like the Medically Trained People agreed, for my appointment was simply designed for me to sign a consent form. Radiotherapy is a go. I repeat, it is a go.

I have every hope that it will pay off, for it has been confirmed that in two-three weeks time I will be having five sessions of radiotherapy on my lumbar region. I simply cannot wait. I had radiotherapy on 22 October 2012, and I have not been bothered by my hip since. Sure, I’ll have to spend five days in the Radiotherapy Department, where if memory serves, one is spoken to with a constant head tilt, but if this means that my pain reduces by a fraction, it’ll be well worth it. In fact, I would go as far as to say that it would mean a great deal to me. If successful, it may even permit an uninterrupted night’s sleep. I am a simple girl with simple needs.

I have had radiotherapy before, but I do not feel the need then was a great as it is now. As a bonus, I was informed by the Medically Trained a Person that not only was he going to fix some of my damaged bones, a side effect of doing so may be loose stools. Score.