Skip to content
Fight like a brave. Don’t be a slave. No one can tell you you’ve got to be afraid
Fight like a brave – Red Hot Chili Peppers
Day +1 … and into the twilight zone …
I had my melphalan on Wednesday. I was glad to get beyond the point of no return. Until the melphalan was actually going in, I half expected the whole thing to get cancelled again. I’m pleased to report that, as promised by the pharmacist, the anti-vom meds are indeed much improved on last time (specifically: Aprepitant), and I haven’t been sick once. A little part of me thinks it can’t possibly be working because it isn’t bad enough (chemo-heads reading this will understand). But I’m sure I’ll be disabused of that idea, soon enough.

When I harvested stem cells back in 2013, we got three times as many as we needed. Two thirds of them have been in the freezer ever since. However, my doctors aren’t confident of the viability of cells that have been stored that long, and so we did another harvest last year. This time, no matter how much cajoling and pumping with expensive drugs, I barely produced enough for a single transplant (my bone marrow is a bit knackered). The decision was taken to use a portion of old cells, plus all the new ones. So many cells, in fact, that they divided the transplant over two days. So that gave me something to do on Thursday and Friday!

Oddly, then, some of the oldest cells in my body right now are also the newest. 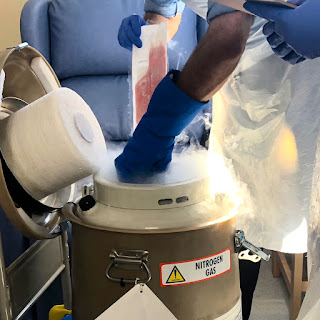 Here’s my cells (looking suspiciously like a side of smoked salmon), coming out of the deep freeze. Then they get a precise few minutes in a 37.5C bath, before being dripped back in to me. All over surprisingly quickly. In total we transplanted nine bags of the fellas.

So far, I’m feeling really much better than I had anticipated. And being at home, instead of sleeping in the hospital, is much better, for mind and body. But the trajectory, and the plan, is unchanged:. By the middle of the week I’ll be without immunity, feeling crappy, and in protective isolation. This strange twilight will not last. Better to focus now on the middle distance: each day now is one closer to feeling better, even if I’ve got to go downhill now, before I can start going back up.