Been a tough week. Too many bad news items to even share them all. Then, Friday, I checked my e-mail and saw one from Craig’s wife saying he had died that day. So sad. Impossible not to think about so many people I’ve met, whether in person or via the internet, who are not with us anymore.
In this case, also impossible not to think about my own family and Craig’s 15 year old daughter. My heart hurts this week. Badly. Last Sunday, we went to the 5th annual survivors celebration that our cancer center puts on. It was a splendid day at Liberty State Park. Had a front row seat to see Gloria
Gaynor perform. But, you are surrounded by several thousand people who are either cancer patients or caregivers and family members. Such an epidemic. Tim has his blood draw this Friday and his check-up on the 18th. I got my physical done last week and wished I could change the first name on my lab reports, slip them into Tim’s file, and have his docs tell us to go home and that we need never come back. Just seems like so much heartache all around me. A friend called me yesterday. Her son has diabetes and her husband has MS. Also have a daughter that is a softball pitcher, like Liv. They are already in serious financial trouble and may even lose their house and this past week, they found out her husband may be let go from his job of over 30 years. I vividly remember Michael J. Fox saying that he didn’t feel sorry for himself, he felt sorry for people who had illnesses befall them that had to worry about money and health insurance on top of it. It’s true. What happened to him is awful, but, he knows his family will be fine, financially anyway, and he is spared that worry. They’re rich. The rest of us are stuck worrying about money, not living each day the way we’d like to be, watching days tick off the allotment we are given just trying to stay above water financially. While I realize that my family is in better shape than others, I also know how quickly that could change when Tim can’t work anymore.
And, here we are, living in one of the most expensive areas of the country. I got my new property tax bill the other day. Just shy of 9600 dollars a year. Works out to 796 a month. How crazy is that? They are re-evaluating this year and who knows, may go higher still. Rises every year as it is. What do we do? Move? My husband’s business is here, his doctors are here, and our support system is here, what there is of it. Speaking of support, my mom is getting worse quickly. My dad is STILL dragging his feet about leaving work. My sister had to call my mom’s doctor and tell her exactly what’s going on because we know she is not getting the whole story. Doctor told my mom she has to stop driving. My dad refuses to push the issue with her. Doesn’t like confrontation. Honestly, he has to step up. It does stink what is going on with them, but, from my point of view, hey, at least the “in sickness and in health” stuff waited until they were in their 70’s, and their kids were raised, and they had guaranteed health insurance. Tim and I were not nearly that “lucky.” So much to worry about. Oh well, another week starts today. Hope it’s a far sight better than the last one. Here’s a pic of us by Lady Liberty last week. 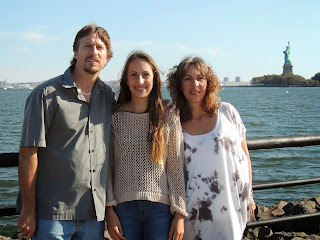