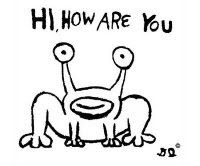 Many moons ago I had a radio show while at university. It was a great Thursday 8:00-10:00pm slot and I used this time to explore the best in alternative music. Well, at least what I considered to be the best. During this time I picked up a tape called Yip/Jump music by Daniel Johnston. Daniel was a unique and troubled soul, having bipolar disorder and believing Satan was after him. His music was very melodic, touching, urgent, sometimes disturbing and always deep. He became a musical star in his own right, and his songs have been covered by The Flaming Lips, Beck, Death Cab for Cutie and Tom Waits. I suppose you’ll either love or hate his music, but if you do like it, you’ll like it a lot.

A few years ago, a documentary film was made called The Devil and Daniel Johnston. I’ve seen it at least five times and continue to be amazed by his genius and shaken by his instability. In some respects, he reminds me of Pink Floyd’s Syd Barrett.

As one of its coolest apps to date, Apple has released the Daniel Johnston’s “Hi, How Are You” game. Appropriately, you play Jeremiah the Frog trying to escape Satan’s curse, with some of Daniel’s songs as background music.

Daniel is still around, living in Texas, still performing on occasion, and producing his own style of art. I recommend you take the time to check out his movie. Here’s the trailer.