Last night, I read a post on NPR’s Monkey See blog called “The Complete Curmudgeon’s Guide to ‘The Sound of Music'”.  The woman who writes this blog is always very funny, but this was the funniest thing I’ve read in a long time. Reading this inspired me to write my own version for my own favorite movie. Keep in mind that I write this with great love, but even when great love is present, there are still things you need to get off your chest. I present to you …

The Complete Curmudgeon’s Guide to The Wizard of Oz 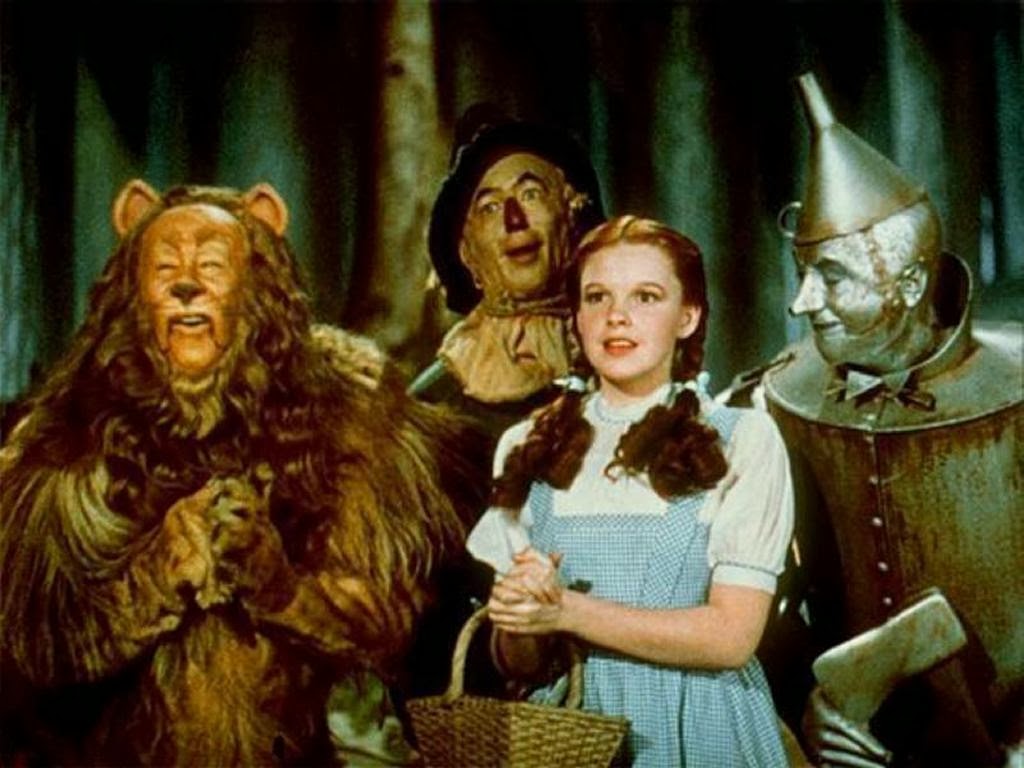 We see some of the Munchkins hatching out of eggs, so … is that how they are born? Or do they just like to hang out inside giant eggs?

I can get on board with “I’d be brave as a blizzard” and even “I’d be gentle as a lizard.” But “I’d be clever as a gizzard”? I think that’s a bit of a stretch there, Scarecrow.

This is one that WCK pointed out to me: Why does the beauty parlor at the Emerald City just happen to have a fully-staffed scarecrow-stuffing station and a tin-man-polishing station? Do scarecrows and tin men go there for beauty treatments all the time? “Do you take walk-in appointments?” “Sorry, sir, we have five tin men to polish this afternoon. We can squeeze you in on Friday in between lion-mane perms.”

“Can you even dye my eyes to match my gown?” Oh, bizarre. And painful.

When the Witch writes, “Surrender Dorothy” in the sky, the crowd starts yelling,  “The Wizard will explain it! To the Wizard! To the Wizard!” Seriously, people? Has the Wizard ever explained anything? You have never actually seen the Wizard. I think all of you know that the Wizard is not going to explain jack squat.

Speaking of that, did the Witch mean “Surrender Dorothy”, as in, “I’m talking to the people of the Emerald City, and they all need to turn her over to me,” or did she forget the comma and really mean, “Surrender, Dorothy”, as in, “Dorothy, I’m speaking to you directly, and you need to turn yourself in”? Either way, the Wizard is still not going to explain it.

Plus, Witch, if you’re going to fly all the way to the Emerald City, why not just swoop down and get Dorothy while you have the chance? Writing in the sky and then flying away seems a little passive-aggressive.

Let’s ignore for a minute that the sign reading, “Witches Castle 1 Mile” is misspelled. This is a castle located deep in a mountainous area of the haunted forest inhabited by the Wicked Witch and heavily guarded by men with spears and flying monkeys. Have enough people wanted to go there to warrant putting up a sign telling them exactly where it is?

But perhaps the misspelling of “Witches Castle” shows that the Witch did, indeed, forget to put a comma in “Surrender Dorothy”.

So, the Scarecrow, the Tin Man, and the Lion, who have thus far shown themselves to be kind, sensitive souls who can’t bear to be slapped by Judy Garland, who cry in poppy fields, and who are excited about getting perms at the Emerald City beauty shop, manage to overpower three armed guards at the Witch’s castle and then, apparently, strip them naked, steal their clothing and weapons, and … kill them? Do they kill those guys? By stabbing them through the heart with their giant spears? By using the Tin Man’s ax? Because if they merely knocked them out, you’d think the three naked guards would show up at some point to try to warn the others.

And just before the (possible) murder, the Scarecrow and the Tin Man decide they are putting the Lion in charge of this dangerous mission. Really, guys? Because earlier he admitted to all of you that he’s terrified of imaginary sheep.

Why does the Wicked Witch of the West have a bucket of water just casually sitting around her castle?  That would be like a regular person having open vats of hydrochloric acid around the house. “Oh, yeah. The acid. It’s part of the decor. Just don’t throw it on anyone.”

After the Witch melts, the guards turn out to be really nice guys, and they’re all, “Take the broomstick! Hail to Dorothy!” Yeah, just wait until they figure out three of their brothers are outside, naked and dead.

The wizard finally — finally!–  appears in public, only to announce that he’s taking off and leaving a scarecrow in charge … and the citizens of the Emerald City are totally cool with that.

Who brings their cat to a balloon launch? “The Wizard is leaving? Oh, Fluffy would love that! No, don’t get the cat carrier; there’s no time! I still need to paint giant circles on my cheeks before we go out!”

The wizard used to make his living flying hot-air balloons, and yet he can’t come back, because he doesn’t know how it works.

“If I ever go looking for my heart’s desire again, I won’t look any further than my own back yard, because if it isn’t there, I never really lost it to begin with.” I have been watching this movie for 38 years. I have read all of L. Frank Baum’s books. I have a college degree, and yet I have no idea what this means. Is Glinda just pretending to know what this means so Dorothy will just go home? Because, really, Dorothy, nobody knows what this means.

So Dorothy is home/recovered from her concussion and everyone is all happy and la la la, but Miss Gulch still has an order from the sheriff allowing Toto to be destroyed. Have we all forgotten that? Everyone is all, “Yay, Dorothy!” but Toto is sitting there going, “Oh, crap.”