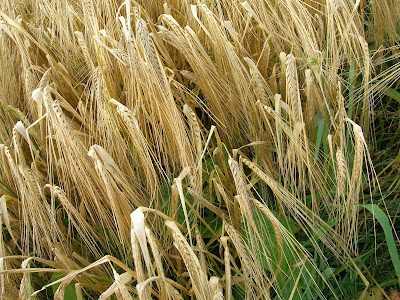 Every morning this week, FL has started the day with a doom-ridden prophecy about this year’s barley crop.
Look at it!  It is the picture of fertility and health!  He reckoned the crop was far heavier than last year and absolutely ripe, at the peak of perfection. There was probably 100 tonnes of grain out there.
So what was the problem?
A storm was forecast.  A BIG storm.  It was due to hit last night, with winds forecast of up to 150 miles an hour in places.  It would flatten the crop.  An entire year’s harvest would be destroyed. 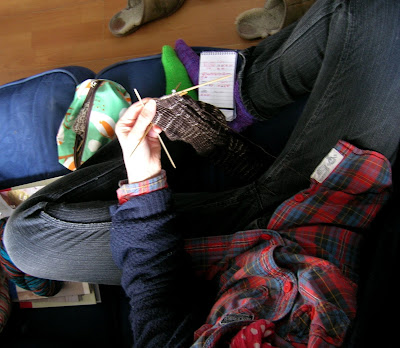 So every morning, FL stood at the window and worried.
The irony being that this was not our crop.
We allow a farmer from the village to work the land in exchange for a range of favours, from the provision of firewood to the digging of ponds and control of the rabbit population.  His day job is working his father’s farm.  Our 40 acres is just his “bit on the side”.
I tried to explain to FL that P. (the farmer) couldn’t just hire a combine-harvester and rush over here whenever he fancied.  He has responsibilities at the home farm. The chances were that he would have to wait for his father to finish using the equipment before he could come over here.
FL just shook his head and worried. 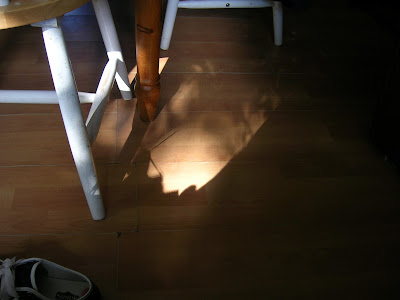 Yesterday was a beautiful day.  I scrubbed the floors and let the sunshine dry them, the front door flung wide open and the dog basking on the doorstep.
Then I sat down to knit, and put on my new CD, London Grammar.
Peace.
But all across the valley, tractors and combines thundered up and down the fields.  Everyone had the same thought:  this was their last chance to save the harvest.  By tomorrow, it would be too late. 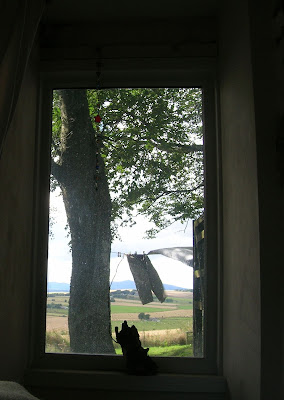 And at about 3.30 in the afternoon, the rumbling began.
Two tractors, a combine harvester, two men and a boy.
They set to work. 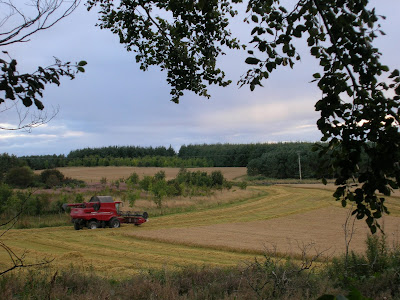 At 7pm, the boy was taken home for tea.
But the farmer kept on working.
On and on, into the night. 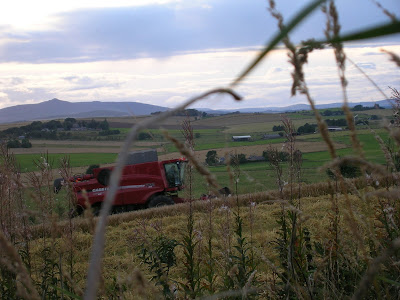 The combine harvester has its own floodlights.
They flashed past the farmhouse windows at about 1am… but that was just part of the job done.
FL and I woke at 3am to the throb of tractors passing by with loaded grain carts on tow.
This morning, there is a combine harvester parked next to the oily neighbours’ fancy cars :)
And the storm?
Well, it certainly rained and it is windy this morning, but nothing on the forecast scale, I am pleased to say.
The fields are heaped high with loose straw.  The farmer’s priority was to harvest the grain and he didn’t bring a baler.  Maybe he will be back later… after a little sleep!
And certainly FL will sleep a little easier tonight.
Harvest home.