Before I started the current regimen, a PET scan last April 9 displayed five different lytic lesions, three of them in the spine.  Last Wednesday’s PET scan showed that all five lesions are significantly decreased, and most are gone.  One isn’t even mentioned. 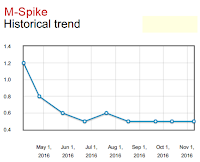 This is excellent news.  We knew that my M-Spike and IgG were down to about 40% of their April values, but that doesn’t guarantee freedom from bone damage.  With these PET results, we can be pretty sure that no damage is occurring.  As we looked at the PET images together, Dr WG showed me a small chunk missing from a vertebra – looked like about BB size – damage that did occur before this regimen, but probably not bad enough to put the vertebra at risk of breaking.

So what is this potent regimen?  Please note: I am not a doctor.  This is working for me, but might not for you.  I am taking Pomalyst (pomalidomide) orally, 2 mg daily, 28 days of 28, and receiving infusions of Darzalex (daratumumab).  At first I received the Darzalex weekly, then every other week, and the last three have been four weeks apart.  According to the Darzalex prescribing document, these monthly infusions continue “until disease progression.”

I’m all for that.  Notice, though, the presumption of disease progression,  Myeloma always figures out a way.  So now that the myeloma is stable, the hope is that the period of stability will last a long time.  Happily, neither medication brings serious side effects with it.

With the Pomalyst and darzalex I am also taking dexamethasone (DEX) 12 mg on the weeks with no Darzalex infusion.  I asked Dr WG if I could stop the DEX, but he said that he prefers to ramp it down slowly.  He voiced the scenario that I have feared from the outset – a broken vertebra would most likely put an end to my running lifestyle.  As he suggests, I will happily (or grumpily) take 8 mg once weekly for the next month at least, before reducing it further.  DEX is no fun, but 8 is better than 12.

Overall the news is good, and life is great.  Before long we’ll be off to Philly, to run the 100th marathon with myeloma.

I can hold a grudge. It’s my one weakness. I can really hold a grudge. Sometimes, in fact, most of the time, the grudge is built up in my head and becomes far worse than the incident itself. On occasion, years down the line, I may admit that I was wrong, but this would probably just be to myself.

With that in mind, I think I need to get something off my chest. If only the elimination of pain was that easy, for as I type, my chest area is sore. Not as sore as my neck though. Oh no, my poor neck, which as people know is connected to the spine. Or is it part of the spine? To the non medically trained person, I have a sore neck, but based on my previous scans, the pain is coming from the spine. Do not hold a grudge against me for that… Until August of last year, I had no reason to know what a C4 was. I know now.

Since that sunny day in August, there is one thing that I have been particularly sensitive about with regards to my body. Sensitive and all so very paranoid. The paranoia associated with my spine and the potential damage that could occur makes post alcohol anxiety look like a meadow on a sunny day. The knowledge that I am walking around with multiple lytic lesions in my spine (and elsewhere), dictates an awful lot of my actions and thus physical limitations. In the autumn, when we were still establishing my pain management, there was a rule, a simple rule which suited my tactile demeanour, and that rule was ‘do not touch me’. It then became ‘do not hug me’. This one was particularly important after a big strong man hugged me in my office, which led to me having to pop a few diazepams and going home. Overtime, as I have become more mobile, these rules have been forgotten and I am more than happy for people around me to just be gentle.

I do not think it is difficult to remember the importance of being gentle. I believe that when people think of me it should be right up there in their thoughts along with how I am the greatest person to have ever walked the planet. I have made no secret of the fact that it is important to be gentle. I did fracture a vertebrae on the bus and a rib reaching for a bottle of water after all. I am brittle. I take it for granted that the people in my network know that and conduct themselves accordingly. I do not take it for granted with members of the general public and for that, I have my beloved walking stick. My friend Katy has developed a new way to greet me using our pinky fingers. A secret handshake if you will. This is thoughtful and appreciated, and evidently, really, really cool.

What is not appreciated and what is quite clearly not the way to greet somebody with myeloma, is somebody coming up to me and grabbing my neck so tightly and yanking it down, that I cry out in pain. For the first time in a long time, in that instant, if I were not attempting to be a lady and you know, in a great deal of pain, I would have punched the perpetrator in the face. Actually in the face and I am sure that the pain from that would be nothing compared to the pain they caused to me nor the paranoia that decided to spring up in its aftermath.

The lesion in my neck (top of my spine), causes me the most worry and currently the most annoyance. I can give myself a blinding headache if I lean a little bit to the left for goodness sake. So, after my neck was unceremoniously shaken by an ignoramus, I instantly had shooting pains up and down my spine and arms. I then spent two days not being able to move a great deal. Happily this coincided with my steroid crash, so I was in bed anyway, but still, I am holding a grudge. I thought the pain had gone, but as I spent six days in bed, it was difficult to fully assess the damage. Now however, having spent three days not entirely in my bed, I can say that I am still suffering. I am still suffering 10 days after the fact. It is a familiar pain and it is a combination of stiffness and the constant sensation of a trapped nerve in my neck affecting the strength in my arms, specifically, though not solely, my right arm. Brilliant. Thanks.

I mentioned my paranoia, and because of this, I have no idea how much of my pain is perceived or actual. I wish I had not been put in this position where I have to doubt myself. The mental torment is enough for me to warrant saying nasty things behind somebody’s back, without the fact that a simple, thoughtless, drunken act, could cause actual long term damage to my skeleton. Let’s emphasise this. Long term serious damage to my skeleton.

At the moment, regarding my injury, I am going to wait to see whether the pain subsides. As for the act and the perpetrator of it, my grudge is building. I don’t ask for a lot (others may beg to differ), but I do ask that people are considerate to my weak body. I would rather that, then people who have not seen me for a whole deciding that I need a one on one counselling session complete with sympathetic noises.

So, My name is Emma Jane Jones and if you do not want me to think that you are the devil’s mistress, don’t touch me.

More generally, if you know somebody has myeloma, to be on the safe side, do not, absolutely do not, tug on their neck. That advice will take you places. I am sure of it.