I’ve been watching these reality shows about people who live off grid up in Alaska. A couple of the families focused on have some pretty well developed farms, developed over three generations of hard effort and sacrifice. The rest of them appear to be the kind of people who, while pleasant enough, are dumber than a box of rocks.

They all seem to share an innate cabin building skill. Watching them assemble their primary residence is actually pretty impressive. Starting with nothing but a few tools and way too few clothes and housewares, they barter for the wood it takes to frame, side and roof their homes. They go to a lumber mill and can usually barter some specific full trees for the wood they need to build their structure. So off they go into the woods and very selectively cut down trees with an eye towards forest maintenance and giving the mill what they asked for. At time, a huge mass of knots that looks like junk brings the highest value because of the number of people who use it for wood sculpting or making attractive grained furniture. Happy with a couple of loads of 2x6s, 4x6s, 4x12s and some outdoor grade plywood, these families make their way through miles and miles of brush to their homesite, and using the long, long days of summer, work a week of 16-18 hour days and just like that, they have a house. Then they might have to go fishing and catch a bunch of salmon or other desirable food fish to trade for used window sashes and windows, doors, and maybe a generator (that they will need to repair.)

Everybody works and there seems to be a closeness to these families that you don’t experience elsewhere. Perhaps that’s from piling 8 people into a single room 16 x 20 foot cabin. Their inventiveness is remarkable. Their skills turn metal junk into wood burning stoves that are efficient and easily maintained. They use the scraps from building as kindling for the first year while locating standing dead trees to fell and split into fuel wood. Their inventiveness also often will bring reasonably fresh water to their homestead, giving them potable water filtered using natures provisions like sand, gravel and water loving flora. The image many have of the smelly outdoorsman that bathes in summer creeks and smells like camel dung is the exception. Many of these people brave lower temperatures than I would to use a cobbled up shower that’s little more than a tub to stand in, a privacy curtain (or not) and a hose with a sprinkler head that gets gravity fed water from their uphill source. They’re a rugged bunch, but especially the teenagers have an interest in the opposite sex that motivates them to put their best foot forward.

The most of these folks are caring and neighbor conscious. If they haven’t heard from someone in a week, they will go visit, often toting along some food, wood, hay if they have animals and a show of concern. I’d like to think I’d get along great with their simple approaches to the black and white palette of their lives.  Up in the far north, a person’s word is their bond, and if they break it they can face people turning their backs on them, a sure ticket to fall prey to the endless dangers. The only thing they can do is go elsewhere, far enough the CB radio networks and AM radio stations can’t reach in order to start anew.

Alaska is becoming the new Seattle, with property prices skyrocketing along with the prices of everything else. You find two worlds where urbanism is taking root. One is occupied by the long time settlers and homesteaders, the other for the nouveau pioneers. Life stays similar for the long time residents and gets mighty expensive for the interlopers. Economics is really the only weapon available to try and maintain a wall against clear cut forests, new roads carved that destroy game routes, and the pollution that the consumer nature always brings along like Typhoid Mary’s that foul the water table and believe that wolves, moose and deer are a problem rather than salvation from starvation.

Back when I lived in Portland, one of my fantasies was to buy a Cessna 180 with amphibious floats and go carve a living as a bush pilot. A couple of my friends did just that, and make it just under the wire to get established before any idiot with six hours of flight time in a tail dragger came bursting in with a hundred more just like them. It was a bittersweet entertainment to see many of these quasi-intrepid people scamper back to the lower forty eight with an empty bank account and their tails between their legs. The firmly entrenched were able to build up their fleets with the fire sale aircraft auctions with pennies on the dollar. While I may have missed out on an adventure likely to make me happy to rise every morning, I did just fine keeping the home fires lit and made a few bucks on the side flying the abandoned customers to their destinations. Since I found my bride and raised three magnificent children here, I’m glad that this was the path I chose. If I wanted to feel like I lived in Alaska, I could fly around wearing a t shirt and disabling the plane heaters. But I’m not a masochist, nor do I have anything to prove to myself, and I admit to the contentment of life as it is. Although I’m hoping that global warming will shorten our winters to a week of piling 50 feet of snow on the surrounding mountains (to keep the rivers, creeks and lakes filled) and to generate hydropower we sell to waterless states at exorbitant prices.

Alaska is a land of adventure, and it is also one of hardship and continual self-challenge, but it can also be a beautiful place to live so long as we don’t let the newbies screw it up. 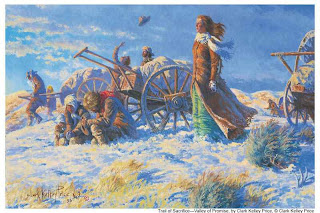