Skip to content
I’m on a different kind of high. A rush of blood is not enough. I need my feelings set on fire
I dare you – The xx
You know the rules round here. DialM is about mm, with the rest of me sort of squeezing through uninvited. Usually in the form of music and travel. Because that’s who I am… (oh, and KFLC = 421) 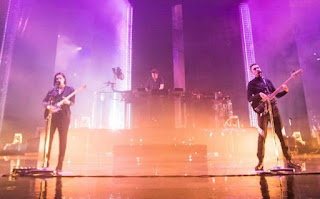 I went to Brixton Academy last week, to see The xx in concert. It was only once I was there that I recalled I had seen them, in the same place, sometime a little over 4 years ago. I know last time round I had to simply stand rigid through the pain until eventually my back went numb. Maybe the morphine had dulled my senses back then, because the gig seemed so much richer and more alive this time round. Echoey guitar; deep rhythmic bass; haunting vocals. Splendid. I love concerts – not least the feeling of having no regard to being the wrong side of 40 (though I take my hat off to the 2 friends who went Sunday afternoon clubbing last weekend. I’m not sure I’d be up for that even if I didn’t have children as an excuse.)

In 2 weeks, Marisa and I are taking the kids to Japan (新幹線温泉寿司). There’s a sense of urgency for us about making adventures, which is definitely a consequence of myeloma. It’s 18 months since we were planning our time in Central America, which really did feel like a snatched opportunity. And yet… time passes and I don’t have a real sense of how long the good times will last, any more. But the longer they do, the more trips we’ll pack in, no doubt, unless something else stops us. Myeloma has made me live more, now, than I suspect I would have otherwise.

Having bunked my last hospital appointment, because I was on a business trip (New York, Toronto, Bogota and Mexico City), I had to book this week’s appointment on the phone. The receptionist would only put me in for the end of the Wednesday clinic, which meant 2 hours sitting waiting, and a different doctor. I have to smile my sweetest to get put back on Friday’s appointment list for next time. Friday’s clinic is only for clinical trial patients, a category into which I do fit, technically. But more importantly, if I turn up early on Friday mornings, I’m spared the endless wait.

My light chains are up, but only a little, within the range where variation in results makes the difference insignificant. The κ/λ ratio is pretty much unchanged. All of which suggests nothing much is happening. The κ/λ has moved in a couple of jumps, doubling abruptly in July 2015, and then again in April last year. But since then it has risen only 50%, and been static now for several months. The myeloma is unquestionably there. And unquestionably returning. But beyond that? Pfff. The doctor is happy enough not to see me for another 10 weeks.

We do have a discussion about treatment options. She mentions bortezomib again, possibly in conjunction with a clinical trial drug (venetoclax? – which I hadn’t previous heard of), before another stem cell transplant. (I guess it depends on how long I hold off treatment, as all these trials have recruitment windows. But if not this one, there’ll be another, no doubt.) And after that I’d still be “naive” (her word) to so many drugs – thalidomide and lenalidomide being obvious ones. Which means I’ve potentially 3 lines of what are, by current standards, very conventional treatments, ahead of me. And that could take a number of years to work my way through.

The UK myeloma group on fb, of which I am one of a group of admins, has had a punishing few months. Relapses. Horrid experiences. Deaths. Partly that’s the toll of winter, and many of the patients are older than me (not that this makes things any better, just maybe less relevant to my prognosis). Some of the stories are shocking. Vicious, callous and abrupt. And being young is no guarantee of a better outlook. I am profoundly grateful, and humbled, by my own relatively benign experience of myeloma, and the massive amount of disease free time I have been blessed with.

Myeloma’s horizon seems to be receding, for now, for me. Though it continues to menace. And when it does return it could do so abruptly, I’m under no illusion about that. In the mean time: