There was enough adrenaline and testosterone in the air it was surprising anyone could see through it. The men in the back of the carrier vehicles checked their own equipment and then the equipment of the man in front and behind him. There was no room for error, no allowance for mistakes. The men bristled with deadly force from their M-4 fully automatic assault rifles to the Glock 40 automatics holstered mid-thigh. Their utility webbing carried flash-bang greandes which would temporarily blind, deafen and make thinking almost impossible temporarily. They also carried smoke and HE grenades. They wore the highest quality armor over their black battle dress uniforms and black kevlar and carbon fiber helmets with head’s up display, night vision, and POV camera. This was a SWAT team and they were, as always, loaded for bear with equipment that both Army infantry and Marines would give their eye teeth for. The military equipment was pretty good, but not as good as SWAT.

Each of the six men in this particular team were steely eyed, bulked up and ripped. Their training was intense and seemingly endless, but then it kept them in a razor edge state of readiness. They were, to coin a phrase, bad asses of the first stripe.  The carrier slowed down and the team leader called out “40 seconds” over the groups comm system. One of the men slid the side door of the vehicle open and the team staged at the opening. As soon as the vehicle stopped, the team leader barked “Go! Go! Go!” and the team hopped from the carrier and moved in a tight front to back group that could have been a conga line, save for the intensity and military precision. Their target was a small clapboard cottage. It’s paint was flaking from the brutality of the Florida sun and the salt air. The front steps were wooden and sagged in the middle and led up to a broken screen door with the bottom screen missing. It sat hlf open. The lead man grabbed the door and held it open while another of the team brought a steel ram to bear against the cheap front door. The door exploded inward and two of the team tossed flash bang grenades through the opening and as it exploded thunderously and with brighter than the sun brilliance, the SWAT team piled in the door yelling “SWAT! Get on the ground! Get on the ground!”

The two people in the home, both in the living room were stunned motionless. One was sixty eight and wore a barber’s smock. The other man was about 75 years of age and sat in a straight backed chair in the center of the room. The SWAT team members threw them both to the floor on their stomachs and bound their wrists behind them with plastic ties.  The more elderly man was having trouble breathing and the other was panting in fear. Both of the men were shaking. “You’re under arrest.” spoke the team leader firmly and then recited the Miranda warning that explained their rights.

“What have we done? Why have you arrested us?” asked the man in the smock.

“Violation of Florida statute. You’re under arrest for unlicensed barbering.” The men were roughly pulled to their feet and guided roughly to a pair of FDLE (Florida Department of Law Enforcement) patrol cars. Them men were taken in separate cars to the station.

While dramatized, this is a true story and it begs the question of whether our police are still into Protect and Serve, or if some of the departments have become wholly military special force units with their only loyalty to the letter of the law s envisioned by political superiors rather than them being in the service of the community to protect it. Swat teams have been used in various states to effect arrests for ticket level offenses like a retiree string to make the extra few dollars needed to meet their financial needs. In those cases, will they be assaulting people who mow lawns or hire themselves out to do chores for a few extra dollars? In my state, SWAT teams have been used to serve divorce papers, frightening the children present to the point of severe trauma and resulting in PSTD. Virtually every police forces has been armed to the teeth following 9/11. and not to protect the citizens. The fact that these police departments have spent their budgets on citizen control equipment is ominous. Especially when these units are better equipped and just as trained as some elite military forces. Soldiers who’ve toured in Iraq and Afghanistan have viewed the police equipment with envy, wishing thet had similar tools and protections as they prosecuted US doctrine in those war zones.

Compare these two images and you can see immediately the similarities of the two different forces. The question becomes, might it be better to do away with the local police in favor of policing by those who have a loyalty to the Constiuition and the people rather than politically employed law enforcement? I don’t state this as opinion, instead I hope to prompt discussion about the matter. Do we really need such highly trained policing, and if so, wouldn’t it be wiser to employ those with more even handed training in peacekeeping rather than trained assault shock troops; a hammer that sees every neighborhood as a nail?

I think it’s a question worth asking. 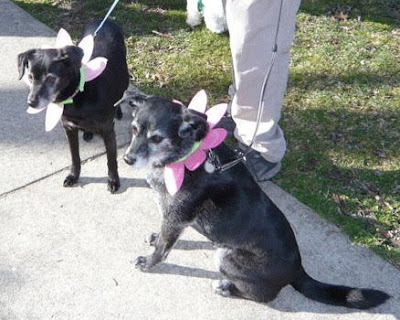 Gracie’s peeps took the girls to a Three Dog Bakery “Easter Begg Hunt” yesterday. Molly (left) and Gracie were dressed as spring flowers, in outfits that were a big hit at a neighborhood gala the week before.

They behaved themselves nicely and were the belles o’ the ball. (At a previous TDB event, Molly stole Frosty Paws from any dog foolish enough to lift his head for a nanosecond.) There were bunnies galore, but our girls were the only spring daisies! 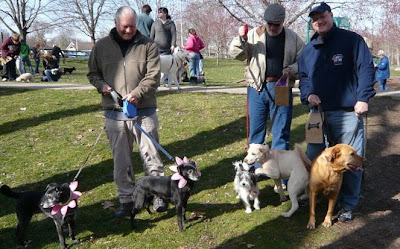 My wonderful Hoodies are at it again, providing two vital services that I can no longer do for myself. First, they chipped in for a housecleaner for a day. Yesterday, this woman started at one end of the Villa and slowly, thoroughly, made her way through 80% of the house. (The 80% was at my request. It would have taken a team of cleaners [and spider assassins] to tackle the basement.) I’m pretty sure my house has not been this clean since the day I moved in.

Vital Service #2 is another Rake-o-rama this coming Sunday. Most of the leaves were raked up last fall, but there are still plenty throughout the yard and flowerbeds. Plus twigs, plus millions of @#!! Redbud tree seed pods, plus billions @#!! Sweetgum tree spiny balls. And if they finish with all of that, two resident experts will help them determine what annuals should be pitched and what perennials should be cut down.

At my one other rakefest, (fall of ’08, I believe) fifteen of my peeps showed up! They are such kind, generous, good-hearted people. That they would do this for little old me… well, it just fills my heart. “Thank you” isn’t enough, but it’s all I can offer right now.