These were Dom’s latest numbers.  The numbers in parentheses are from November 2018.

The M-Spike concerned us, but Dr. Calabreze wasn’t concerned, as his Light Chains look so good.

He did ask us to make an appointment with Dr. Safah at the Tulane Cancer Center to get her feedback.  She can’t get us in until late March.

Our Slidell Oncologist is delighted with Dom’s numbers: 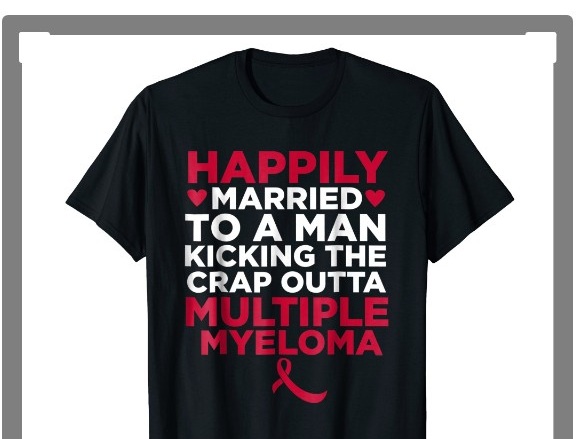 Our Christine just sent me this shirt.  Perfect timing!  Dom has a ZERO M-SPIKE!

Life is good.  God is great!

We went to Tulane yesterday.  It was one of those “good news – bad news” things.

Dr. Safah said that he had ZERO M-SPIKE.  That he was in remission after just a couple of rounds of chemo months ago.

He’s got a new lesion on his “good” hip.

She wants us to get radiation in Slidell, continue Physical Therapy, and then return to her in a few weeks.

She wants to start him on KYPROLIS® (carfilzomib) as soon as he’s done with radiation for pain. Doesn’t think that it will cripple him like Velcade/Revlimid did.

This makes absolutely NO SENSE to us.  His blood is clean, but these Plasmacytomas keep popping up?????

So, we met with our Slidell Cancer Center Radiologist, Dr. Mannina today.  We LOVE the guy.  He was zapping Dom’s other hip last Spring/Summer.

We’re headed back on Monday morning for measurements, etc. and will begin 10 radiation treatments over 2 weeks on BOTH hips.

Anyway, gang…. our heads are spinning.  We’re on a new journey.  Please say a prayer.

Dom is getting stronger day by day.  His physical therapist has basically made Dom his “project”.  Dom almost feels guilty, as the guy pretty much ignores everybody else when we’re there 3 days a week.

He loves his rollator and doesn’t use a wheelchair any longer.

Things are finally returning to normal for us.

We attended Mass for the first time in months last week.  It felt SO GOOD to be back!

We spent much of today at the Tulane Cancer Center.  Dr. Safah grabbed some blood work for his M-Spike and Light Chains.

She also gave us orders for a couple of MRIs on Friday.  We can do that locally.

Then back to Tulane in a couple of weeks.

She mentioned a drug that kills Myeloma, but isn’t CHEMO.  Sounds good to us.  We’ll learn a lot more in a couple of weeks.

Thanks for continued prayers and good vibes!

Just got the call.  His numbers are jumping all over the place.  (My opinion, not the doctor’s)

Some background:  For years, his M-SPIKE was ZERO.

Last summer, it jumped up to .3 and stayed there for almost a year. (blood work results)

At this point, Dr. Safah ordered a Bone Marrow Biopsy.  The reading was only 0.2 and were were all happy about this.

Fast forward to this month:

We have been going to a Slidell oncologist out of convenience, but have an appointment with Dr. Safah at TULANE in December.  I just don’t know what to think about this.  The bone marrow biopsy is a more definitive test than blood work.

His LIGHT CHAINS are weird, too.

I’d be delighted to get some feedback from you guys.  TIA.

Wednesday I brought a Mayo Clinic blood draw “kit” to the local clinic, where they drew the blood and shipped it overnight back to Mayo.  Last evening the results showed up on Mayo’s patient portal, and I’m happy!

Since early April my treatment regimen has been 2 mg of Pomalyst every day, with infusions of Darzalex every week and then every other week, currently with 12 mg of dexamethasone (DEX) on the weeks between Darzalex infusions.  During that time my IgG and M-Spike dropped about 20% per month until a month ago, then leveled off.

Wednesday’s results confirmed that IgG and M-Spike are stable, at least for now.  IgG was 515 mg/dL two months ago, 544 last month, and 506 on Wednesday.  M-Spike followed a similar pattern and was 0.5 g/dL on wednesday.  These numbers are as low as they have ever been since my diagnosis 13 years ago, and just a third of their values of last April.  The chemo regimen is doing a great job for me.

Where to from here?  Could we cut the Pomalyst or the DEX?  It’s nice to think about, but mostly I’m just happy to be stable for now and content to wait another month.  I suppose another PET scan is indicated, to be sure that the lesions in my vertebrae have faded back (as I think they have), but I can wait for that too.  I haven’t heard from Dr WG at Mayo yet – perhaps he will have a different idea.

I also had a heart disease scare in the last marathon, but a recent stress test was normal, actually better than normal, so I think the angina-like symptoms were caused by acid reflux.  Also, because my most recent colonoscopy was ten years in the past, the doc ordered one of those and that too was negative.  I feel thoroughly checked out and ready to run a few more marathons!

Things are kind of “gloom and doom” here.

For 6 years, Dom had a ZERO M-Spike.  Last summer, it jumped up to .3 and stayed there for almost a year.

Most recently, it was at .8

Our Slidell doctor “signed off on it”.  I guess he had a “wait and see” attitude.

I went to PCB for a week.  Dom was supposed to join me on June 30th for the holiday weekend.

He got a call saying that our Dr. Safah at Tulane wanted him to have a bone marrow biopsy.

I immediately came home.  (I like that she’s pro-active…. if something happens, we’ll blow off the local guy and go back to NOLA).  The reason we started seeing the Slidell guy was out of convenience.

We spent most of the day at Slidell Memorial Hospital yesterday.  Appointment for 11am, biopsy at 1 pm, then 2 hours in his room before they let us leave.

We’ll hear something late next week.  Please keep Dom in your prayers. 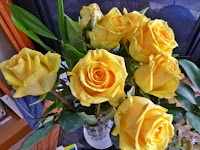 My sweeties and I bought a nice bouquet of yellow roses to celebrate my latest treatment results.  In the last four weeks on Pomalyst (pomalidomide)(POM) and Darzalex (daratumumab)(DARA) my IgG has dropped 20% from 807 to 644 mg/dL, and M-spike 25% from 0.8 to 0.6 g/dL.  These numbers are the lowest that I have seen in my 13 years with myeloma.

Not all of that progress comes in the last four weeks, of course.  Here is a chronology of treatments and results since January, 2016:

Currently all of the immunoglobulins that we measure, IgG, IgA, and IgM, are below the bottom of their respective reference ranges and lower than I have ever seen any of them.  Implications?  For sure, my immune system is weaker than normal, but I don’t know if it is actually weaker than it was before the POM/DARA regimen began.  I wish that IgA and IgM weren’t so low, but perhaps that is the price to be paid for now, because the myeloma tumor burden has been reduced significantly – has to be.

That’s the very good part.  I try to visualize the inside of my bones, dark red tubes with those little Y-shaped IgG Kappa immunoglobulins floating around hunting for the errant plasma cells and taking them out one by one.  Yee-ha!  Take that.

Somehow the POM plays an important part in this scenario too.  I haven’t figured out how to visualize that, but for now it’s enough to imagine that the POM weakens the cancer cells by reducing their fuel supply, or makes them easier to find, or recruits other parts of the immune system to help,
or whatever it is that POM does so well.

What’s next?  One more weekly infusion of DARA, and then, as long as the regimen continues to work, every two weeks until September, and every four weeks thereafter “until disease progression,” according to the Darzalex prescribing guide.  The worst-case result would be progression of the disease within weeks, and the best result would be a complete response, where immunoglobulin levels actually return to normal and the myeloma cannot be detected except by extraordinary measurement methods.  The most likely result is in between.  Time will tell, and patience is demanded even if patience is in short supply.

For myeloma geeks: Darzalex is a monoclonal antibody which attacks the myeloma cells directly, just as my own antibodies and other immune defenses can attack them, but more effectively.  It is an immunoglobulin of type IgG Kappa, whereas my monoclonal myeloma cells are type IgG Lambda.  How do the measurements of IgG and M-spike distinguish between these two monoclonal antibodies, when I had received an infusion of Darzalex just the day before the test?  In each infusion I receive a 1200-mg dose of monoclonal antibodies.  When that is diluted by about 5 liters (50 dL) of blood (typical for a human body), it comes to 1200/50 = 24 mg/dL, which is a small value compared with the 644 mg/dL of my own (good and bad) IgG.  Check my math please.

However, since the Darzalex has an estimated half life of 18 days and I am getting weekly infusions, my blood contains more than just the most-recent dose, so maybe the correct amount is two or three times as high, perhaps 50 to 75 mg/dL.  That’s a guess – the actual math is well above my pay grade.  Even so, the concentration of treatment antibodies is only about 10% of the reported value of IgG, 644 mg/dL.  Dr WG suggested that the technician who reads the M-spike could separate the myeloma from the treatment, but I don’t know if that works for the quantitative measurement of IgG.  More to learn.

Two grandchildren are visiting this weekend.  One is learning about birds, and watched a mother wood duck go into our new wood duck house to lay an egg.  The other is sitting in Grandma’s lap, helping her read books to him, or getting help from Grandpa’s in solving puzzles.  Precious moments all around.  When I was diagnosed the common wisdom was 3 to 5 years and out, but here we are 13 years later enjoying grandchildren who weren’t even born then.  I feel so lucky that novel medicines like Pomalyst and Darzalex have kept me alive to get to know them, and for them to know their grandpa.