There are lots of ‘scientists,’ otherwise known as the academics on Monsanto’s payroll, who keep spouting the preposterous statement that there is no real science to back up the claims that GMO are bad for our health, but yet another study says otherwise.

Recently published in the Journal of Hematology & Thromboembolic Diseases, the study underscores the potential ‘leukemogenic’ properties of the Bt toxin biopesticides used in almost all GMO foods that are currently planted on more than 3.9 million acres of crops in the US. Many of these crops are shipped to other countries who have not yet banned GM foods from their imports, so the prevalence of their use on US soil affects the whole planet.

Just a few months ago, references to GMO were made by scientists in France who conducted a study that pinpointed Monsanto’s genetically engineered corn, called NK603, as a major cancer-causing agent. Rats developed cancerous tumors the size of ping-pong balls. The study was called into question; however by academics under Monsanto’s reign.

Now, the study states that the biopesticides engineered into crops like corn, soy, sugar cane, etc. carry what is known as Bacillus Thuringiensis (Bt), also called Cry-toxins, which contribute to all sorts of health problems including:

Furthermore, Bt toxins used in prevalent GMOs can target mammalian cells, particularly of the erythroid lineage (red blood cells) which results in damage to the cells that is significant enough to start as anemia, and end up as cancer. Also, Cry toxins were found to be capable of exerting their damaging effects even when suspended in distilled water, and did not require alkalinization through an insect’s physiological form to become activated.

Put simply, this means that while Cry toxins may have been developed to kill bugs, they kill us.

I was recently made aware of a 19 year old named Kyle who is taking on AML up at UM C.S. Mott Children’s Hospital. He is a rock star guy from everything I have heard about him. I was invited to visit him today (thanks Ann!) to help provide some dominate cheer as Kyle continues to try to knock the AML down to the point where he can go to transplant, and his only hope for a cure. 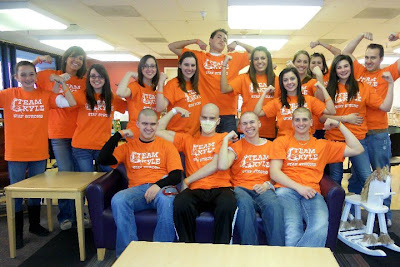 Being back at UMHS, but this time on my own accord and not because of a blood draw, chemo infusion or transplant, I was awaken again with the reality that there are people everywhere, everyday that we will never know who are giving their all to kick cancer and continue to dominate life. Kyle is one of them.
Dominate prayer, positive thoughts, whatever you may call it, so Kyle knows Love surrounds him. Also, join Team Kyle by considering to get swabbed and added to the bone marrow registry. You could save a life.