I’ve decided it’s about time we got ourselves out of the doldrums caused by too many “bad” things over such a short space of time. I know that Paula wouldn’t have wanted us to be moping around forever. I still look every morning for an email from her, but that too will pass, to use an expression I’ve often heard.

Of course the weather doesn’t help. I think we’ve had two dry days the past month, one was on the day of Paula’s funeral and the other was yesterday. The garden has suffered for it. Nothing much has grown except the lawn which we can’t cut due to the rain and the chickweed which threatens to choke everything.

Toni, who hates getting wet, certainly doesn’t like the state of things. Having to “go” outside is a real problem. She firstly has to go out in the rain, which did I mention she hates and then she has to “go” on grass that is almost taller than her!

Actually we did try and cut the lawn yesterday but someone left the mower too close to the garage door and during the mini flood we had last Thursday, water got into the handle. Now I thought “that was a week ago, it’ll have dried out by now.” Obviously not given the loud bang and black smoke that billowed out of it when we tried using it! No real harm was done and Mr Lawn Mower is now at the lawn mower hospital. I on the other hand will probably never be able to look at a Flymo again without breaking out into a cold sweat.

We’re into August already! The work on the garden has continued, leaving poor Toni bare earth to lie on.

That was until Tuesday when we took delivery of this little lot: 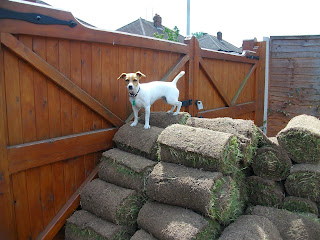 As you can see Toni thought I was possibly a new piece of climbing apparatus, that or a means of escape.

We spent a day and a half in blistering temperatures careful laying it all. The results aren’t too bad either. 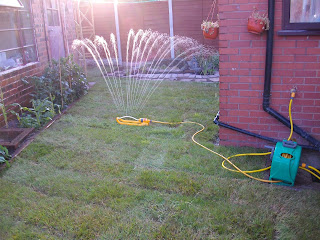 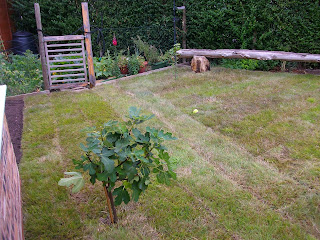 What’s that growing in the middle of your lawn I hear you cry.

That is our new fig tree, complete with 4 figs! 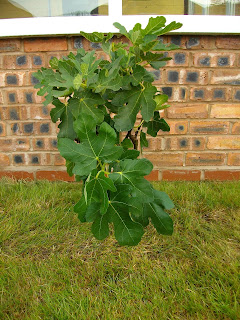 Oh and just to make Paula