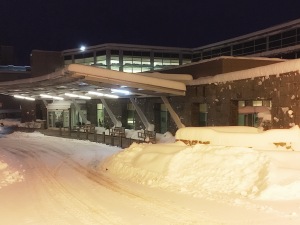 On the day you arrived, temperatures dropped into the single digits. A winter storm had battered northwest Oregon. For three days, feathers of dry snow fell in the mountains and throughout the Columbia Gorge. The Hood River Valley, which is named for the town that will be your home, rested under a thick white blanket.

Schools closed and the interstate shut down. A weather advisory halted activity in most communities. But you were safe in the care of your intrepid mom and dad. They arrived at the hospital at 5:30 am, having navigated blizzard-like conditions with the aplomb for which they are renowned. Your parents possess the determined grit of athletes, a trait you will inherit. 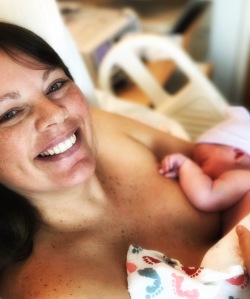 We knew when you would be born. A C-section was scheduled for January 11, 2017. Risk factors that arose after your sister’s delivery, three years ago, predicated the operation that brought you into the world. Your birth occurred at 8:28 am. You weighed 9.7 pounds and measured 21 and 1/2 inches in length.

You emerged from surgery with bruises on your upper arms and a red abrasion on the back of your head. At my first sighting in the maternity ward, your skin glowed with colors ranging from light pink to deep purple. You had remarkably long fingers and toes. Chubby, well developed arms and legs reflected the strength of the woman who carried you for the nine months of your development.

You quickly took to nursing even though mom’s milk did not flow the first day. With each attempt at feeding you lay contented on your mother’s chest nuzzling and bonding alongside she who would be your primary guide during infancy. 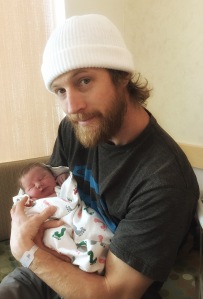 Everyone took turns holding you. First of all, your dad. His self-confidence is one of your birthrights. As a builder, he gets things done. You will come of age in a community built, in part, by your father and his friends.

After dad came Grammy Jennifer, Gramma D, Nana, Papa Guerra, and myself. You have adoring grandparents who were present on the day you were born. Grandpa Jeff came a day later, equally proud and excited by your arrival into the world.

Your long wavy hair resembled big sister Savannah’s at the time of her birth. She had spent the morning with the grandmas, then visited for the first time in the middle of the afternoon. You were not yet eight hours old when she held you gently in her arms. If you fussed, she consoled you with soft reassurances. Mostly, though, she marveled at your twitches and reflexes … your aliveness. 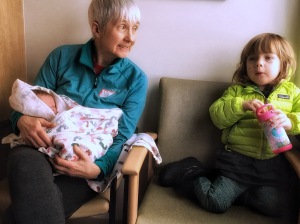 You and Nana and big sister Savannah.

Soon, her every move will captivate your attention. Her creative play and caring nature are personality traits you will mimic. You could not ask for a better role model.

On day two, donor breast milk satisfied your hunger. This led to long naps punctuated by squeaks, snuffles, and murmurs. I held you for 20 minutes during one of these rest periods. If you stirred awake, gentle rocking helped you relax.

By the third day, your sleep periods increased further. Again, I cradled you in my arms, this time for over an hour. You slept peacefully, occasionally shrugging your big shoulders and kicking the blanket off your feet. 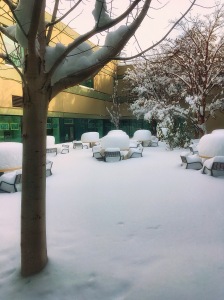 Courtyard of the hospital cafeteria.

Later that day, Friday the 13th, you exited the hospital. Packed snow covered the streets. The temperature hovered at 17 degrees. Your birth certificate read, Samuel Edward Smith. The first name has a solidity that appealed to your parents. Your middle name is a tribute to grandfather “Papa Guerra,” your mom’s dad.

I like the name. Nonetheless, given the wildness of the winter’s weather, I felt partial to calling you Stormy.