I was upstairs when B shouted me.

Me:  ’I’ve got no pants on.  I was going to have a shower.’ – Look, I still say shower since it does involve the shower but it is more of a hose down at present

Thinking he wanted to show me something outside that would disappear unless I saw it at that exact moment and trusting it didn’t involve a neighbour standing in the kitchen I wandered downstairs without my trousers on – I had my knickers on and my cardigan was quite long.

I arrived in the kitchen to find B with a stern expression on his face and his arms folded across his chest.

B:  ’Look at this.  I opened the box and the first three were like this…’ 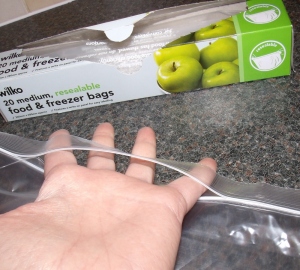 Now I think he both expected and wanted me to say ‘It’s not really worth the hassle is it’ but considering I’d had to come downstairs and was standing trouser-less, but socked,  in the kitchen I said

‘Yes, but its the principle.  I think you should take them back.’