We just went to the dump that is at the end of our road. About 2 miles or so.  We filled the van( well, I watched as B did it), with all kinds of junk and the insulation from under the house. that has been a huge undertaking for my husband and a very messy one. He’s wearing a hazmat suit and air mask thing.  The reason is rats!!!! Why does it have to be rats?  But NO one on our hill has cats anymore. Our 2 cats are inside and only go out when we’re with them.  Blackie our feral turned lovey cat died 2 years ago.  He was a great ratter.  So in the past year, we’ve had the rats coming and going .  We’ve done a lot like keep the chicken food locked at night, put a sonic thing under the house and traps. It has helped a lot but the damage was done to the insulation under the house and it all had to be removed.

Thus, it all went to the dump this morning plus other tidbits.  Yay!!!!  I love dropping stuff off and that much is gone.

Not much frugal happening in our life right now, just keeping the budget going. Our health insurance thru UNFI went up over a 100 a month so that’s a bummer but I’m grateful for the health insurance as it is excellent coverage.  I have my LLS grant so that covers my portion and I am so grateful to the people that donate to the Leukemia and Lymphoma Society. If you’re looking to make donations this year consider them as the donations go to research into finding a cure for blood cancers.

Our next set of projects are finishing the fence line along the property line.  This started as our chickens kept going over there and the neighbor was yelling at them. Of course, this is the hoarder who has 6 boats (abandoned), loads of crap everywhere, and then he started a garden in his ”round up” yard.  I certainly wouldn’t eat anything from his garden.  Anyway, B is putting up a fence so they don’t go over there.

Then we need to build a new deck off the studio as that one is rotted thru and dangerous.  It did last 18 years so not bad. But that might end up pricey as my son would like the deck bigger so he can put a few chairs out there.  We’ll start that sometime this month.

No big inside projects.  I had hoped for a minor kitchen redo but that’s not going to happen this year.

I’ve been out to the barn and pulled out most stuff that was in my son’s side so he can organize it.  Also, getting into the back room and taking everything out so it can get cleaned. I started washing some of the windows. The floors are dirt so B has rugs down and they need to be taken up and shook out.  It is looking all way better. B even got rid of an old cabinet and there’s a second to get rid. Hurray!!!! The space is looking much better.  This is old funky barn not a cool one so whatever we do is helpful.  We’d love to pour a concrete floor but that would be too expensive for us.

The temperatures are inching up after some really lovely mid-’80s temperatures.  We are watering quite a bit but it’s nice to have green gardens around the house.  Unfortunately, the water bill is high. $170 is high but what are you going to do. Our water is supplied by the local water company and there’s no way around it.

Dinner is BBQ carne asada( I picked it up at Trader Joes) and a salad.  I have some tempeh left so I’ll BBQ that for B.  I also have some garden potatoes so I may roast them up too.  We had lovely roasted veggies last night and they were yummy.

Well, its been a few weeks since my last time at the library. I miss it but life goes on. Im trying to be active around the house and doing a few projects. I need to get some primer at Home depot and paint a couple of walls we are going to be redoing this summer. Im keeping up on a load of laundry a day per Flylady. Menus planned for the week.

Tomorrow is Doctor day. I did get some of my blood work back and ,Yes, My neutrophils are down, but not as low as last time. But I’ll still have to get another blood test next Friday and see if they’re up to 1500.  So, I have a lot of questions for him tomorrow, mainly, if pomalsyt isn’t working where do we go from here.??

I received all my paper work about unemployment only to be disappointed to have to cancel it as it says ,”am I available and able to work full-time.” Well, NO, duh… of course i can’t work full time with my medical issues. So, try calling EDD, it is impossible to speak to someone. Ive tried 2 days in a row and all it says is, there are too many people calling. Uhh, so what am I suppose to do. I may go into the local office , but Im not sure thats a good idea.

So, Im off to read, and see what the day brings. We’re getting some summer squash from he garden and I just saw a couple of zucchini . I make zucchini fritters that are really good. I top with a little sour cream or creme faiche and its yummy.

I’ve decided it’s about time we got ourselves out of the doldrums caused by too many “bad” things over such a short space of time. I know that Paula wouldn’t have wanted us to be moping around forever. I still look every morning for an email from her, but that too will pass, to use an expression I’ve often heard.

Of course the weather doesn’t help. I think we’ve had two dry days the past month, one was on the day of Paula’s funeral and the other was yesterday. The garden has suffered for it. Nothing much has grown except the lawn which we can’t cut due to the rain and the chickweed which threatens to choke everything.

Toni, who hates getting wet, certainly doesn’t like the state of things. Having to “go” outside is a real problem. She firstly has to go out in the rain, which did I mention she hates and then she has to “go” on grass that is almost taller than her!

Actually we did try and cut the lawn yesterday but someone left the mower too close to the garage door and during the mini flood we had last Thursday, water got into the handle. Now I thought “that was a week ago, it’ll have dried out by now.” Obviously not given the loud bang and black smoke that billowed out of it when we tried using it! No real harm was done and Mr Lawn Mower is now at the lawn mower hospital. I on the other hand will probably never be able to look at a Flymo again without breaking out into a cold sweat. 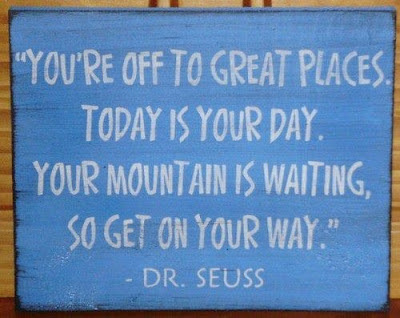 The sun has been shining over the past several weeks and
I just wanted to post something a little brighter
than my previous post.
The weather is beautiful and the last few weekends
have brought our family a chance to work in
our yard and garden.
﻿

Another month has flown by and it’s time to show you all my garden. It is probably the very last time as the weather has turned a bit nippy and most of my produce has done it’s thing and is now over. 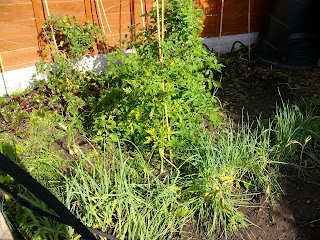 A mess of unthinned leeks and compost tomatoes. 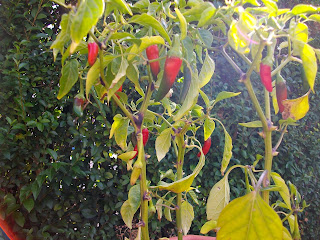 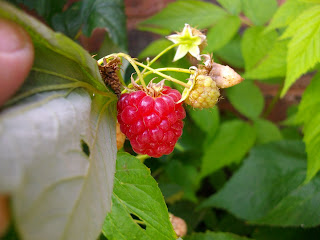 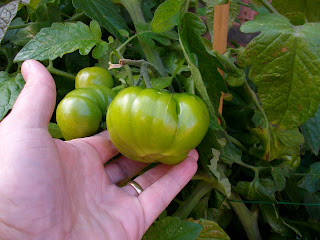 The tomatoes still refuse to ripen.Next month we’ll have to find something more interesting to blog about, although if good news is no news we’re glad we’re boring you all.

Dad isn’t very pleased with me. How was I supposed to know it wasn’t allowed anymore? I mean Mom just stood there and watched me doing it, she never said a word. It seems I’m in the dog house again. :(

Well August has arrived. The peas are over now, so no more photos this year.

The courgettes continue to grow. 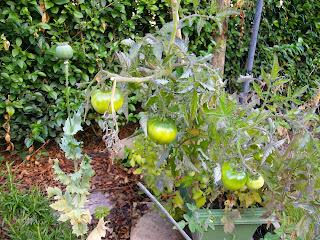 The tomatoes are doing a bit better, but still green. 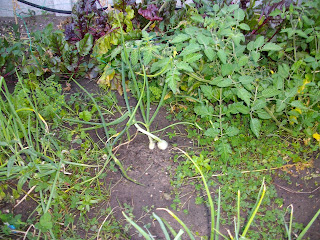 The onions are small, but perfect for pickling. 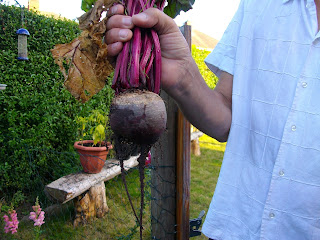 The first of the beetroot has been picked and pickled. 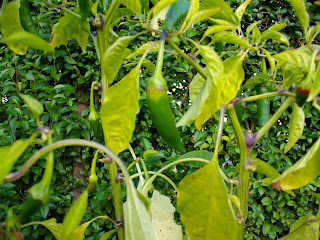 The chillies, the red ones are picked regularly. 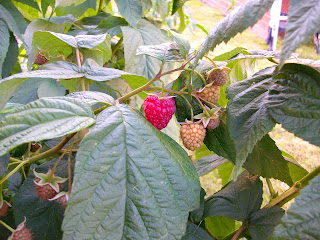 A second crop of raspberries. 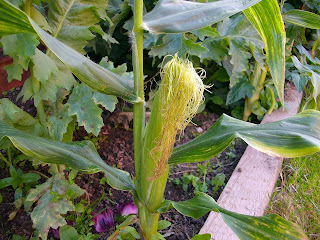 I thought I’d keep you all posted with happenings here in the sunny West Midlands. We’ve been busy in garden and Mike has had a couple of hospital appointments. More on that when he gets a chance to blog.

Today I decided to share my plans for our evening meal. I am going to make a lovely cottage pie with extra lean diced steak, which I will mince with my new electric mincer, carrots, peas and onions. The vegetables are of course home grown and organic. 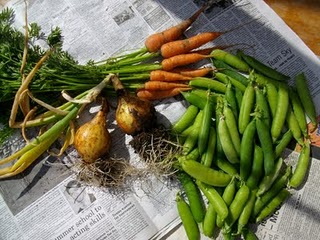 I left the dirt on the carrots and onions to prove I grew them myself﻿! I bet you are all glad I didn’t grow the beef too.

My wonderful Hoodies are at it again, providing two vital services that I can no longer do for myself. First, they chipped in for a housecleaner for a day. Yesterday, this woman started at one end of the Villa and slowly, thoroughly, made her way through 80% of the house. (The 80% was at my request. It would have taken a team of cleaners [and spider assassins] to tackle the basement.) I’m pretty sure my house has not been this clean since the day I moved in.

Vital Service #2 is another Rake-o-rama this coming Sunday. Most of the leaves were raked up last fall, but there are still plenty throughout the yard and flowerbeds. Plus twigs, plus millions of @#!! Redbud tree seed pods, plus billions @#!! Sweetgum tree spiny balls. And if they finish with all of that, two resident experts will help them determine what annuals should be pitched and what perennials should be cut down.

At my one other rakefest, (fall of ’08, I believe) fifteen of my peeps showed up! They are such kind, generous, good-hearted people. That they would do this for little old me… well, it just fills my heart. “Thank you” isn’t enough, but it’s all I can offer right now.