The fox raised its head and looked intently first one way and then another before it bowed its head to stare at something on the ground. It hadn’t seen me apparently, of if it had it didn’t care. I was too far to be a threat and on the wrong side of a barbed wire fence marking the boundary of the plowed furrows the fox had been doing his food shopping on. The furrows were new and many rodents had found their comfy homes wrenched into the sunlight, turned inside out. Their misfortune good luck for the fox.

I stepped back away from the fence and turned back to my car, sitting on the roadside with an augmented list to the passenger side. The lean was caused by the roadside embankment and amplified by the flat front tire. I mumbled a curse and walked to the trunk to get the jack, wrench and spare tire. There was no one on the two lane blacktop road. I wouldn’t have been there either had I not managed to pick up what turned out to be a screw somewhere along the way. It had been shoved, point first, into the tire. I considered this terrible luck. How on earth could that screw been sitting, balanced on its head so that it would get stuck right straight through the rubber as I rolled over it?  There was no answer to my question, it would end up one of the many mysteries of life like why buttered toast always fell butter side down. In the end it didn’t matter. The damn thing was stuck in my tire, the tire was flat, and now I had to change the tire if I wanted to get on with things.

I grabbed the spare tire and knew immediately that it was flat too, there was no firmness to it. I pressed my fist against it and put my weight behind it, and my hand easily compressed the tire. I cursed again and looked up and down the roadway again. This time though, I saw a green pickup truck lumbering towards me. I stepped out into the road and waved my arms, probably looking like I was trying to flap my way into flight. I quit doing it and just stood there, no doubt I’d been seen. The truck rolled up to me, slowing as it approached. I stepped to the side and the driver pulled up next to me.

“Car trouble?” he asked pleasantly. He was an older man, probably in his sixties, gray fighting with his black hair in the salt and pepper look. You could tell he’d been wearing a hat the way the brim had left an impression. I said yeah, I had a flat and my spare was bad too and he invited me to get my tires and come along to his farm. “We can get ‘em both fixed up for ya.” he told me. He shut the truck off where it sat in the middle of the road, and taking the lug wrench from me started taking the lugs off the wheel while I placed the jack and started lifting the car. In no time both bad tires were in the back of his truck and we were in the front, heading to his farm. It was a mile down the road, set well back from the roadway by maybe a half mile. He had twin silos standing guard over a big white barn, the farmhouse settling comfortably in a grove of oak and maple trees. There were a few smaller buildings as well, indicating by their weathered dignity to have been there a while. “Been in the family for six generations now,” he said, apparently reading my mind.

He pulled up in front of one of the smaller buildings and we got out. He drew a big sliding door to the side, revealing a mechanical shop with a fair collection of tools. They all had the same look as the farm. They were old but strong and functional. We chatted about where I was from and where I was going while we pulled the tires from the rims. Both had suffered similar insult, one had a screw in it and the other a shard of metal of some kind. He took a wire brush on a drill and roughed up the rubber on the inside of the tires where they’d been punctured, then he smeared some kind of glue looking liquid on the spots. He pulled a match from his shirt pocket and lit it one handed with his thumbnail. He touched flame to the liquid and it took flame and burned for a few seconds until it began to bubble. He produced a couple of square patches from a drawer and applied them to the now flame-less but smoking rubber, pressing them into place with the backs of his fingers. It was hot, he pulled his hand away and shook the fingers and blew on them. I put the tires back on the rims while we kept chatting.

When I’d finally muscled them into place, he dragged an air hose from where it was coiled on the wall and jiggled the tires as he applied air to the valve stems of each tire. They inflated quickly and stood firm and ready in no time at all. “Good as new!” he said grinning. “Well, mostly, I guess.” I smiled back. As I was looking at him I could also see out the door, and a very pretty redheaded girl, in her teens, was walking our way. Her face was freckled and she had a lean and athletic body that was clothed in a pair of tight fitting jeans and a tailored looking western shirt.I’d been saying something to the old guy when I saw her, and stopped in mid-sentence thinking that was one really pretty girl.

“Who’s that?” I asked him. He turned and looked, a grimace forming on his formerly pleasant face.

“Never you mind her.” he growled. Raising his voice he called out to her to get on into the house. He called her Marcy.

“Is Marcy your daughter?” I asked him. Again he told me to never mind her and pushed one of the tires at me. I picked it up and he grabbed the other and we put them into his truck bed. He waved me toward the door and went around and climbed into the drivers seat. He had the truck moving before I got my door fully closed. He drove much faster back to my car than the leisurely pace he’d taken as we went to his farm earlier. When we got to where my car was, he set the parking brake, hopped out of the truck and grabbed a wheel in each hand and dropped them behind my car. He hadn’t said a word on the trip back and wordlessly he got back into the truck and kicked off the brake and put the truck in gear. I stepped toward the passenger window, saying my thanks when he gassed it and took off down the road back towards home. I stood in the road for a minute, watching the truck recede and felt confused. Shrugging, I turned to my car and set about putting my wheel back on.

With my car back on four wheels and a good spare in the trunk, I drove down the road, back on my way. I nodded at the turnoff to his driveway, a gesture of thanks seen by no one. I realized that day that we humans are often indecipherable. You never really know what the next person is thinking, what joys or pain lies secretly under the facade they show to everyone. To others, we just look like people, sometimes revealing emotion or sometimes not. We give off vibes of generosity, empathy, bitterness or hatred; often times masking a truth about us that’s different. It’s the reason that there are expressions about walking a mile in another’s shoes, not judging a book by its cover, and things like that. The weathered old farmer was generous and accommodating to me, only to switch to seeming mistrusting and annoyed. I wondered if he’d really helped me out of generosity, or to ensure he could get me away from his property faster. I have no idea what was on his mind, such is the mystery we all are to one another. But as I think back on him I do it with gratitude and appreciation. He helped me at a time I needed help.

But he also started me thinking about people, and how there was a visible person as well as a hidden one inside, and maybe even another inside that one. Maybe someone that no one might ever know or even be aware of, even the person themself. I’ve never really stopped thinking about people and wondering what makes them do the things they do, why they think what they think, and then wonder if I really know what they think. It makes it difficult for me to be very judgemental –although I’m very capable of being judgemental. But then again I’m as human as everyone else, and in the end we’re all our own kinds of mystery.

Dear Auntie Paula,
I thought I would let you know what I have been up to recently. I had a bit of excitement on Monday night, well actually Tuesday morning at 1:30, when I heard a couple of foxes fighting outside the house. I jumped up to look out of the window and there it was, a fox. Being a friendly sort (ahem) I said hello, quite loudly so I could be heard and it looked up at me. Wow I thought, a fox is looking at me, so I shouted even louder and started wagging my tail. I tried to get Mike and Lorna to let me out to play, but they just grumbled about the time and went back to sleep.
The two of them haven’t been spending as much time playing with me recently, so I’ve had to amuse myself. Any way yesterday they were busy and I got bored. 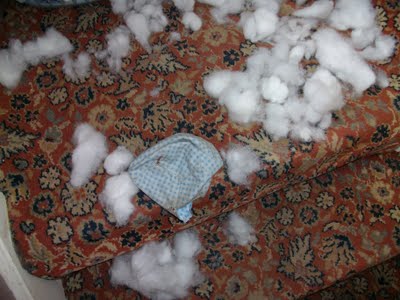 Mom says she doesn’t know how so much stuffing fitted into such a small ball.
Sorry, Mom says it has had it this time.
Hope you, B. and Bud are wellLove Toni x x x