Can I get a high five please?

After a bit of drama yesterday and apprehension this morning, I was seen by a Medically Trained Person who told me that my toothache was a toothache and I could have my treatment today. So, here I am, sitting on the second floor of the Macmillan Centre receiving a litre of liquid, which is a mix of cyclophosphamide (chemotherapy) and saline. To be clear, a litre of liquid administered intravenously is a lot of liquid. Like, a real lot. Two hours worth to be precise and before that, I had two bags of other medicine, which apparently, will help prevent me from vomiting up my dinner later.

This is it. It’s the start. It’s what I have been waiting for for six weeks. Longer. I was devastated yesterday when I thought I was going to have another delay. Right now, all being well, is the beginning of the end of this chapter of My Myeloma. I have waited six months to get to a point where I can see an end, and I can. I don’t want anything to take it away. The drugs are going in me, right now. As sick as I will get from this chemotherapy, I simply do not care. I don’t care how sick I am going to get during the transplant. I just want it to end. And today, is a massive, massive step. It is here.

I have never been so happy to have an IV. See?

Now, let the powers keep me safe and infection free so I can adhere to my word processed timetable.

I just want it to end.

I went for labs yesterday morning. I’m almost equidistant from the downtown hospital and the suburban satellite clinic. I try to do ecerything except transfusions at the suburban clinic, not because of the distance, but the time/traffic/hassle of shlepping downtown, plus having to pay for parking. I can’t believe that after paying thousands of dollars for chemo, transfusions, or whatever, they ding the patient for parking!

Anyhoo, it’s not a long drive, and it’s on a major thoroughfare, so I can usually get to the suburban clinic in 10-12 minutes. On the way there, and on the way back, I passed major, multi-car, ambulance-requiring accidents. Coincidentally, they were both in the opposite direction, so I wasn’t caught in the ensuing traffic snarls, but it was frightening, even as a passer-by. And a reminder that we’re all a second or two away from tragedy caused by a texting moron, a chattering bimbo, a distracted dingbat.

Although I was “borderline” I decided to get a transfusion today, and another dose of Aranesp. The transfusatorium was mobbed and I couldn’t get an appointment until 1pm. If all the planets lined up, the whole thing should take about 3.5 hours, getting me out of there just before rush hour proper. For the first time in all my many visits… there were kiddies in there. Not one, but two. Not as patients, but stuck with accompanying visitors.

Honestly, one of my perpetual rants is against people who seem to think that hiring a sitter is some kind of child abuse. Either they’re too cheap, or too lazy, or incapable of separating from their child for a few hours. Whatever; the people who drag their kids everywhere just set my teeth on edge and make me sit on my hands to resist dope-slapping them. And of all the annoying, inappropriate places these copter moms drag their poor kids to, this has GOT to be the most ridiculous. Why would you drag your otherwise healthy kid to a germ- and vermin-ridden hospital, and force them to sit for several hours, to the annoyance of scores of SICK people?

The four year old little girl, bless her heart, was good as gold. Her hair was in the Little Black Girl ‘do, with a dozen little braids springing from her head. But some genius put bands with square plastic bobbles at the base of each braid. I couldn’t imagine trying to lay back and sleep with a head full of those things. I was also freaked out that her great-gran (who was probably about my age!) had three-inch fingernails. I know I’ll have nightmares about those. Anyways, between the television and a hand-held video game, she stayed quiet and amused through her mom’s afternoon-long ordeal.

The one that really got me was the little boy, maybe a year old. I didn’t see who his mom was accompanying – a husband, sister, friend? Doesn’t matter. I can’t come up with any reasonable excuse for shlepping that baby to the hospital. He was a new walker, and just wanted OUT of that goddamned stroller. And every time I dropped to sleep, he let out a shriek.

Of course, my fun wasn’t over. I should have beaten rush hour by several seconds, but I got in a traffic mega-snarl. (Thank goddess I’d made a pit stop before leaving the hospital.) More than fifteen minutes to go a single block; no way out! The reason, I finally discovered was that some rookie genius pulled a car over on a major thoroughfare. He did not have the sense to direct this car around the corner for ticket-writing, and instead backed up traffic for miles and miles. When I finally finally finally got out of there, it really was rush hour. Not the end of the world, but a 35-minute stressfest instead of a 20-minute cruise.

When I finally got home, I laid down on the sofa and didn’t move for three hours. I think it may be time for me to stop driving.

Mom & Dad were here for a wonderful visit, but left just a day before some excitement at the Villa! First, I need to back up and tell you about when I first went to look at Miss Molly, almost nine years ago. Her “foster father” came to the door and before he even let me in the house, asked, “You don’t want a dog for protection, do you?” No, I assured him, just companionship. He let me in, and I fell in love with this little mutt, who we now know is actually half dog/half chicken.

I was awoken by something last night. I’d taken a sleeping pill, so my brain had to work hard to rouse me. I was vaguely aware that there was Something in the bedroom with us. Molly didn’t even bark. She just looked at me as if to say, “Hey, you better check that out.” As I forced my fuzzy brain toward consciousness, I realized…there was a bat in my bedroom. (I didn’t get hysterical because this was 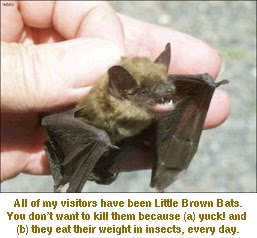 actually the Villa’s third bat, but the other two were 20+ years ago. Please read about them here; it’s relevant.)

The bedroom door was open and I saw it fly into the living room. I closed the bedroom door, and went into the kitchen to prop open the back door. Supposedly, bats don’t want to be indoors, and if you open a door or window, they will find the fresh air and get out. I sat in the living room for half an hour, watching this stupid bat fly back and forth, back and forth. I knew I was destined to fall back asleep soon, so I closed the door, opened a living room window about 6″ (it was about 15º outside!) and went back to bed, closing the door tightly behind me.

I haven’t seen the bat since, and I hope he found his way outside. I’ll find out soon enough if he didn’t.

I embarked on some painting and remodeling shortly after moving into the Villa. I had a guy helping me, and one evening I noticed he’d left a dirty little rag on one of the cupboards. That wasn’t like him — he cleaned up every day before leaving — and right before I touched it, I noticed this dark little rag had a face!

I called a friend who lived nearby. “Save me from a little critter!” I said, clearly implying that a Real Man wouldn’t leave a damsel in distress. He came over, we made a net out of a pillow case and a hanger, and sure enough, he was able to gently scoop the bat in, and take it outside to release it. The friend moved away shortly thereafter; I’m sure there was no connection. Yah.

Three years go by. I was in the living room watching tv with a guy I was dating; we’ll call him Milton. Suddenly a little bat swooped across the room in front of us! My dog and I ran for the bedroom with Milton at our heels. “Wow,” he said, “What are you gonna do?” he asked. Is he kidding? As I shoved him through the door, I said, “I’m going to wait here while you get rid of it!” (What is it with guys nowadays? They have to be goaded into chivalry.) Many minutes of grunting, running, panting, and cursing went by. He finally knocked on the door, and I opened it to find him puffed with testosterone.

It was gone. That should have been the end of The Tale of Bat Two. But it’s not. Fast forward about five years. My parents are again visiting, and we’re watching Antiques Roadshow. My dad commented that he’d always wanted to learn more about Grandma’s Big Vase, which has sat on top of my corner cabinet since I moved to the Villa. He thought it was worth a lot of money.

“No, Dad,” I protested, “I’m almost sure that it’s post-war Japanese. I don’t think it’s that old.” “Let’s see if there’s a mark on it,” he said, and pulled a chair over to reach the vase. As he tipped it upside-down to check for a manufacturer’s mark, out tumbled… a skeletonized little bat.

With gloves, plastic bags, and manly bravery, Daddy made the little skeleton go away. I had to endure just a tiny bit of teasing about my housekeeping skills. But I haven’t looked in the Big Vase since then, and I’m sure not going to now.