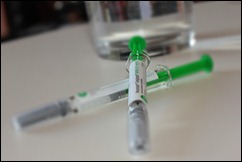 my uncle was diagnosed with grade III astrocytoma (glioma) in the right occipitotemporal region of the brain, following a solitary seizure attack in july 2009. the tumor was excised on 11 jan 2010 and histological reports revealed grade III astrocytoma. following the surgery, he was treated with IMRT radiation (novalis) and timazolamide. in jan 2011, the mri revealed contrast enhancement of a very small area in the surgical site. subsequent GHA scan also showed slight uptake in the same area. presently, we gave stereotactic radiotherapy (novalis) with effect from 3rd feb consisting of 5 cycles.

on 17th july 2011, again an mri scan was done which showed a slight activity in the anterior aspect of the excised tumor cavity apart from the posterior activity already detected. We started him on avastin in October 2011 thinking the tumor may have progressed to GBM. He has responded well to 7 doses at the interval of 15 daysI was wondering if we could start him on DCA with avastin.

It was received from an anonymous person, so I apologise for not using your name. I’m hoping that you are just a little confused and I haven’t misled anyone in anyway. I am not a medical person is any shape or form, everything I have learned and posted on here is are either my own thoughts on subject or have been reposted from web sites that I used as a resource. I am not qualified to give advice on the subject of your uncle. Hopefully though someone who reads this blog is and maybe they can help you out with some advice. I’m happy for them to leave a message here for you so that you can monitor the comments and please keep us all up to date so I know that are thoughts are with you.

I would like to know of as many people as possible that are using DCA as I am thinking of using it myself. Dr Richard Orlowski has a Myeloma patient that I will be following to see how things go and keep everyone informed once I have an update.