As part of a harebrained scheme to enjoy my final ‘healthy’ weeks before the transplant plans, I opted to take my steroid dose in one go, on Monday 23 February and ending four days later. That was four whole days of a lot of dexamethasone. Something I have done many a times before, but I soon discovered that it was different from the befores. My tried and tested theory was for me to get the big crash out of the way, so I did not need to worry about the pesky little mini crashes that I have become accomstomed to since Velcade was reintroduced to my life in December, which in turn would allow me to enjoy myself. I knew it would take me down, and I had planned to just let it, and silently will it to disappear as quickly as possibly. Vite, vite.

Despite it being a tried and tested formula, I failed to fully realise what four days of steroids would do to me after eight months of non-stop chemotherapy. The result? Persistent ugliness. And I mean ugly. I mean five days of my bed, sweating, lots of carbohydrates, bad breath and swollen glands. Last Tuesday was the sixth day, of the crash and I congratulated myself for getting dressed with my trusty Rubywoo on my lips, but I after a two hour trip to the hospital for a dose of Cilit Bang, my energy was spent and it was back to my sofa for some blanket time. We’re it not for the hospital and the fact that I did not want the cleaner to think I was a slothenly sloth, I would have happily gone for a sixth day of flat bound cosiness.

All reason told me that the crash was going to end, but it took me down to such an extent that I could not see how it was possibly going to end. When I started to write this blog a week ago, I wrote that “with the benefit of hindsight, I probably would not have decided to take this vile poison the way I did, because the take down was beyond something I imagined and could take.”

One week later, with the benefit of hindsight, I can say that despite it not being quick, I did absolutely the right thing. I find it interesting that last week, I documented my frustration. Now, I do not recall feeling that fed up with it all. I can almost look upon it fondly, like something made to deliver self indulgent anecdotes to friends.

“Housemate, do you remember the time I did not leave the flat for four days and did nothing but lie on the sofa watching mediocre films and eating crisps? My, that was a hoot wasn’t it?”

See? It’s a story with legs.

The four days I stayed in my flat, I was somewhat impressed with myself that I managed to shower everyday. I did not get dressed in the sense that I was wearing clothes I would be happy for people to see me in public, but I did put on the trusty trousers with an elasticated waist and my, did that feel good. When I was not looking at my television or the inside of my eyelids, my view was this (well, in colour): 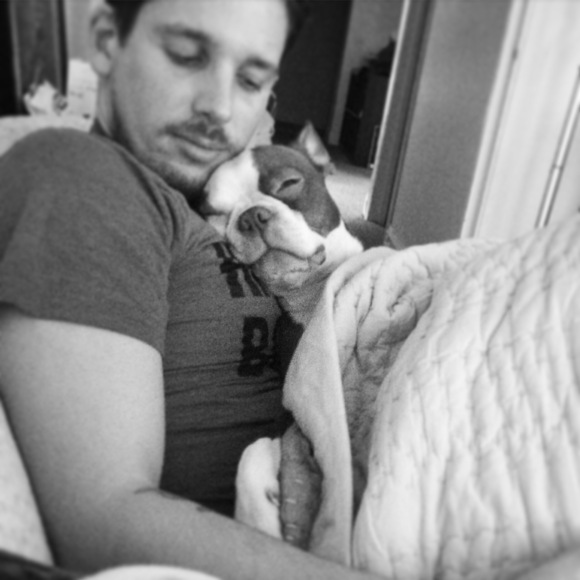 I can say with complete certainty that one creature appreciated my crash.

One of downsides of not having the energy to leave the house, is grooming. Or the lack there of. As a long time steroid abuser, I suffer from an unfortunate side effect in which my face becomes inexplicably prickly. Prickles that become more noticeable when applying makeup is forgone because doing so would require an hour nap afterwards. By the Sunday, my third full day in bed, the black prickles became too, too much for my slow brain to take and Housemate was selfless in his kindness. He walked for three whole minutes to Boots and came home with a packet of Veet Facial Wax Strips, which he treated me to, so I could de-fuzz my face. Do you know what that gave me beyond the obvious removal? Another anecdote.

“Mamma Jones, Housemate went to Boots today so I could remove my beard.”

As for now, six days after the crash ended, I have some energy. I’ve been able to socialise and process some thoughts beyond those of self pity and thoughts of no escape. For now at least. I am well aware that my six day crash is just a precursor for what is to come. If I wanted that to go away quickly, I cannot imagine what I am going to feel like post transplants. My dispare last Tuesday scares me, because I have more than six bad days ahead of me. On the otherhand, my feelings post crash is a buoy. I mean, just think of the possible anecdotes…. And Bruce snuggles.