I received my first dose of intravenous Aredia (bone building medication) today. Unlike Zometa which runs over 15 minutes intravenously, Aredia must run intravenously approximately 4 hours. The new UCH BIC is having environmental temperature ISSUES – IT IS FREEZING IN THERE, but everyone assures me they are working on the ISSUE! At any rate, the reason that I’m dressed like nanook of the north! 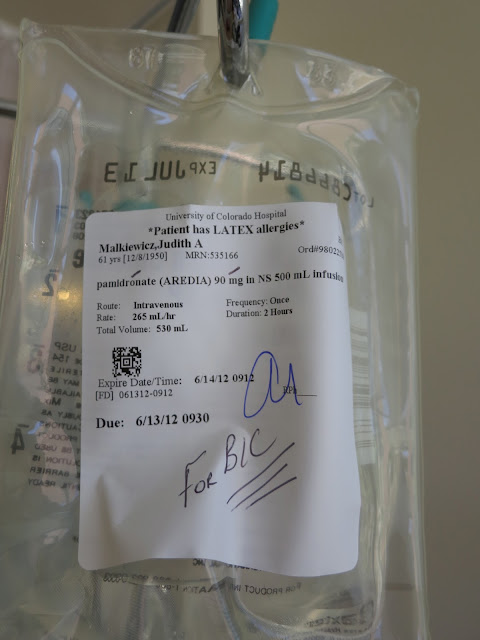 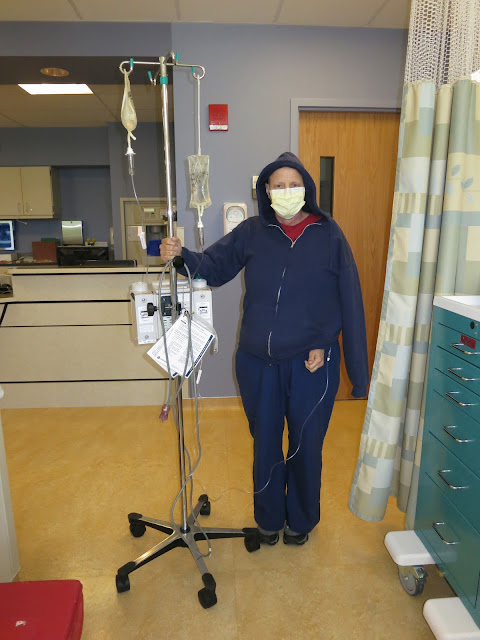 I slept a good portion of the time. Again, poor Jani sat in a hard, straight back chair with no blanket and waited for me. 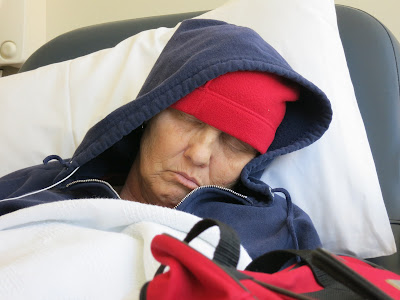 The FDA has released a new warning against osteoporosis drugs, stating that many of them cause thigh bone fractures.
According to NaturalNews, the FDA has issued a new warning for *ALL* drugs in the bisphosphonate family, including Merck’s Fosamax (marketed generically as alendronate), Roche’s Boniva, Novartis’ Reclast and Warner Chilcott’s Actonel. Why does this apply to us? If you’re like my mom, then you go for bisphosphonate treatments once a month, be it Pamidronate (Aredia) or Zometa.  In a nutshell, there are two types of cells that maintain the metabolism (wearing down and growth) of our bones. Osteoclasts break down the bones and Osteoblasts build them up. In normal, healthy individuals, both are necessary and essential. However, in individuals with Multiple Myeloma, osteoclast activity is greater than that of osteoblasts, meaning that the bone is wearing down at a faster rate than it is building up. From what I know, these bisphosphonates prevent or slow down osteoclast activity, but do nothing for osteoblasts. This is all great and dandy, but when taken over time, it can cause bones to become brittle and rigid, increasing the likelihood of fractures. This is because osteoblast activity is already limited/hindered, and thus, no new bone cells are formed (instead, old ones remain).


Back to the article…
The FDA is also requiring that consumer-friendly guides be distributed with every bisphosphonate prescription to make sure that risks are understood by those taking the drugs, and how to minimize them. Thigh fractures are a common occurrence amongst those taking bisphosphonates and come with little or no preceding trauma. They may also be followed by months of a dull, aching pain in the thigh or groin area.
The FDA has also directed doctors to reassess whether patients should continue taking the drugs after five or more years, as they appear to offer little or no benefit after this time (but, with an increasing rate of fractures), according to Felicia Cosman of the National Osteoporosis Foundation.
You can read the entire article HERE

Time to celebrate!Thursday was my last “Chemo Party” for Hopefully a verrrrrrry lonnnnnnng timmmmme!Like I explained in my last post, this has been

I could not have done this without the expertise, and encouragement from the team at my oncologist’s office. 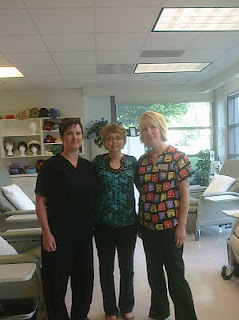 Jamie and Kelly, the nurses have been wonderful. Not only are they skilled at what they do, but they have become friends throughout this journey. 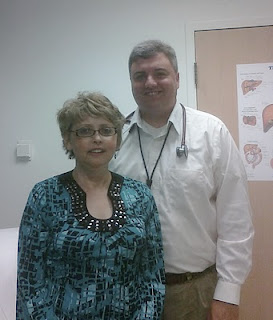 We feel very fortunate to be in the care of Dr. Nathan Rich. He is my local oncologist. He works closely with the Multiple Myeloma specialist at Huntsman. He is very “down to earth” and takes his time to answer our questions and just visit. He has been my ally through this rigorous treatment. Really helping make the right decisions for me and weighing out the options. I have been having most of my infusions at his office and then meeting with the “MM bigwigs” in Salt Lake once a month. I really value his expertise, wisdom, and kindness. I will continue to see him and receive Aredia-a bone hardening infusion every two months.
I am so grateful for the care I have received from these amazing people and the miracles of modern medicine!
p.s. and you asked how did I celebrate? I went home, ate cake and had a three hour nap.