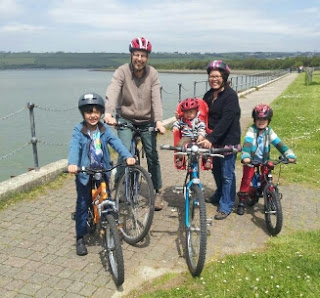 We spent half term in Somerset (this photo was actually taken in Devon). The weather was nice. We went to the beach. We went cycling – twice. One day we cycled 12 miles, which is an impressive feat for Gyles’ little legs, and for my weak ones. We swam most days. We visited a castle/ rode a steam train/ had cream teas/ fed the ponies/ paddled in the river/ ate ice cream.

Sounds pretty normal? For me, that is a big achievement. There are aspects of normal which I find very aspirational!

I’m clearly getting stronger – I have suffered less and less from muscle exhaustion, and only resorted to an afternoon nap once all week. Sadly though, my new covering of hair wasn’t quite enough to stop me burning my head the first day the sun shone!

We’re getting precipitously close to the magic “100 days” since my transplant, which marks the first formal milestone in my recovery. As well as acting as a benchmark point for my response to treatment, it will also mark the end of the period of time which I pledged to focus on recovery to the exclusion of all else – i.e. not to do any work. I will need to think about what happens next – I can’t remain in this recuperative lifestyle forever, much as I am grown accustomed to its charms. But there are a few hurdles to get over first – starting with a bone marrow biopsy later this week. So a few more gritty posts will follow shortly.

But just for now, I can almost pretend I am normal.

*Figurative swimming, that is. We had a pool at our holiday cottage, but I didn’t go in the sea, which was proper cold, this week, though I did paddle in the river. As a general rule I do like swimming even when the water’s cold. Marisa would consider it one of my frustratingly English foibles. Bracing dips in Lago Gutierrez in Argentina, Lake Solitude in Wyoming and Lake Atlin in British Columbia all spring to mind as exotic examples of the urge. As do sea swims in Tasmania in September, New Zealand in April or the Isle of Coll even in the height of summer. I even swam in Antarctica once, though that was volcanically assisted. I’d have been straight down Minehead beach, into the freezing Bristol Channel, really I would, if only I had a little more haemoglobin pumping around me. I think it won’t be long now before I’m ready to open the pages of “Wild Swimming” again.