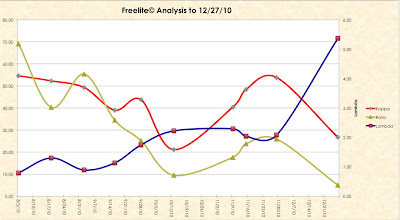 Click on the Chart for a Larger VersionThe red line represents the quantity of kappa-type light chains detected in my blood. The blue line represents type lambda. The yellowish-green line is the ratio of the two (k/l). (Click here for all the background information you could ever want to know.) In mid-October, when the low value in kappa was found, I was ecstatic! Perhaps I would be free of cancer by Thanksgiving!

Sadly, it didn’t turn out that way. Kappa rose significantly from then until the end of November, leaving me to think that the allogeneic transplant had failed. I was fully expecting a disastrous rise with the next measurement. But imagine my surprise and relief when last week there was another steep decline in the cancer!

I have the notion, probably demented, that a significant reduction in kappa would mean that the remaining cells, being much fewer in number, would produce fewer new plasma cells per time period, which in turn would mean that my new immune system would kill them off more easily (that is, at a higher rate).

Suppose, for the sake of illustration, the kappa line was flat, neither going up (malignant cells increasing in number) nor doing down (fewer). Then the number of malignant cells being killed off by the new immune system would then equal the number of enduring cells plus the new ones they are able to produce (assuming that the immune system can destroy enduring and new plasma cells equally). As the total number of malignant cells falls, fewer new cells are made. Therefore we might be seeing the beginning of a crash in the cancer, hopefully to zero. Like the turning of the tide of a grand battle, the imbalance in the number of fighters on the soon-to-be-winning side disproportionately increases the their effectiveness. The winning side becomes overwhelming.

Of course, a dramatic, self-sustaining crash could be more a desired outcome than a likely one. Just look at the lambda value! In the last twelve years, lambda has varied from zero to normal, never above. Until now. What does that mean? Am I now fighting two versions of the same disease? Or is this just a meaningless oscillation from an immature immune system? Do you know what I hate most about medicine? The waiting and the watching. To understand my chart, we’ll just have to be patient, not a skill at which I excel.

The Christmas tree comes down today. I must admit that I shall miss it, not only because it is beautiful, but because it delights the children, who, as a result, delight me. (I hope to add a picture of the tree to this post soon.) How lucky I am, at my age and condition, not only to have found a wonderful wife, but also, in my dotage, to be presented with another opportunity to do the parenting thing well! Actually, I feel more avuncular than fatherly, but the children range from eleven to fifteen, the right ages for the combination of strong mother and avuncular father. I’m trying, and failing, to avoid spoiling them rotten.