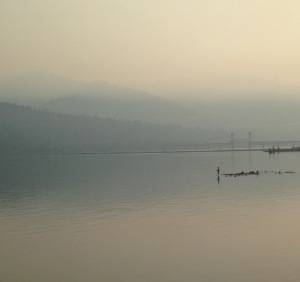 Yesterday morning, before the wind rose and fanned the fires smoldering in the Northwest’s back country, I strolled the waterfront along the Columbia River. The water laid flat as glass, tinted grey with the smoke that shrouded the hills and diffused the sunlight that strained to pierce the cottony haze.

A lone fisherman sat on a bench tying flies, too intent with his knots for even a nod as I passed. I ambled along to land’s end at The Hook and, upon my return, he’d scrambled offshore atop an outcrop of rocks. There, he flicked his wrist with the fluid abandon known to those who fish with flies. His rod bowed with the action and the line whipped back and forth until finally he cast the feathery bait. It dimpled the surface for an instant before he lifted it into the air to begin again.

I walked on and left him alone amid the river’s wide expanse, absorbed in his art and the rapture of his solitude. Soon, the wind would increase and raise white caps on the water. By midday, kite boarders and wind surfers with colorful sails would crowd the basin west of the bridge and truck tires would whine on the metal grate of its road bed suspended between the two states of Oregon and Washington.

But at my passing, silence prevailed and the fisherman, patient, oblivious to me, and to all that had ever happened and to all that would ever be, pitched his filament to and fro in the muddled light above the placid waters of the Columbia River.