We just got home from Vermont last night. It was cold and we did get flurries a lot but my sister has a gorgeous spot there and it’s so peaceful. Tim worked hard doing the wood floors but then we got some free time and sight-seeing in. We hit Ben & Jerry’s on “free ice cream” day. Woohoo! It was a bit difficult, out-law wise, as we stopped by their VT house and retrieved some of
our belongings that were there. Don’t know how we’re gonna get his 2 snowmobiles out of there and home here. His parents were not there, obviously, and our daughter cried when we drove away.
We don’t know how much we’ll be going to VT now and it’s been such a big part of her life. Sad. Tim’s folks found out that we were going and called Tim’s cell and Olivia’s too to wish THEM a safe trip. Olivia spoke to his mom, Tim did not pick up the phone. His mother left another message for Tim today about seeing Olivia for Easter and giving her a gift. This sparked a lot of stress as my husband considered dropping her off for an hour but he does NOT want to see them and he blew his stack on ME before. I was upstairs, resting, minding my own business. I just love that his family causes such strain on our marriage. SO not cool. I told Tim that this was his family and his decision and he would have to learn to deal with them without blasting me, in front of Olivia, and causing the exact problems that they were causing us, in our home now. I mean,  just how many people in that family are gonna blast me every time they’re in a bad mood. It’s an epidemic, I tell ya.
Well, let’s get back to Easter and talk about something more important and relevant. Here’s something spiritual. My brother-in-law is not religeous at all. He’s been having some real trouble at his business and is considering retiring from it and moving to their Vermont house. Just a few days before we left for VT, he was in the shower and was so disheartened, he decided to ask God for a favor. He said, “God, just give me ONE good day. That’s all I’m asking.” The very next day, he got a call from his bank. He’s thinking, “oh boy, what now?” The guy tells him that they made a mistake with his principle and interest on his loan for the commercial building and they owe him 90 thousand dollars. Taken off his remaining loan, basically he has a few more payments and the loan is paid. He was stunned. I told him, “that was a sign for you, directly from the BIG MAN”(and I’m not talking Clarence Clemons). I said, “listen, I’d like to hit the lottery, how about you get nekkid in the shower and ask for me!” We had some laughs about it all but I was a little surprised to hear him say in VT that 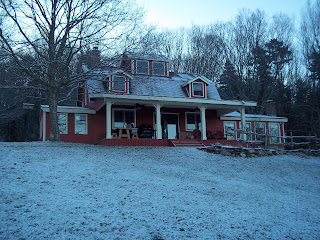 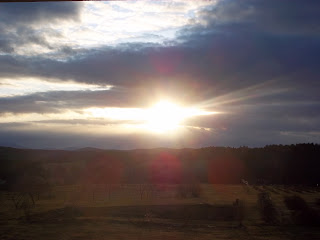 he is still not a believer. I said, “He showed you He is listening.”  I guess it didn’t help that he came home from VT and his secretary quit and he had to fire another guy. But, I think I’m gonna say my prayers in the shower for now on. They still might not be answered, but God may get a laugh out of it anyhow. The pics are of my sis and b-i-l’s house and the view. Our first day there, this old man neighbor comes driving his truck across their land and shooting at animals out of the window. SO illegal and pretty scary when my kid and dog were just out there before this.
My brother-in-law walked out there and had a little talk with him and he won’t be doing that again. This place is in the real country. You know that when you can buy baby food, beer, and bullets, all in the same store. Cue the banjos.