So, we had a Halloween party at our house for about 20 kids and their parents. The story of the party would probably take up an entirely different post. I remember the party being pretty fun, but I’m wondering if my brain is treating this party like childbirth — remembering only the good parts and blocking out the messy, painful parts — so that I will continue to host kids’ parties and not let my party-planning gene die out.
It’s like my brain is going, “Well, yeah, kids were throwing brownies at each other and grinding the crumbs into our carpet, but it really wasn’t that bad. You just breathe through the pain.” I’ve already volunteered to host a Thanksgiving party.
Anyway. WCK was beyond excited about this party, and we spent a whole day decorating. Then Jay got in on the decorating and decided that he and WCK would make a Pumpkin Guy to sit out on the porch and greet our guests: 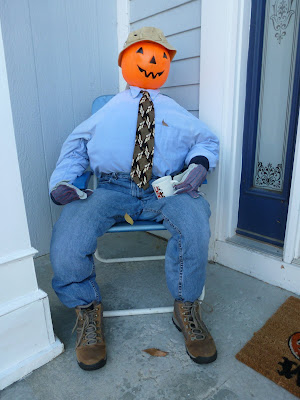 I love how he’s just hanging out and having a nice cup of coffee before he goes to his job as a … what? He’s wearing a tie, so he obviously has some kind of supervisory role, but he also gets to wear jeans, hiking boots, and gloves. I’m guessing he’s some kind of pumpkin-patch inspector.
So the party was a wild success. (Sugar cookies in the carpet? Oh, it’s the kind of mess you forget!) WCK and Jay brought the Pumpkin Guy inside, and then they decided to change his head and give him a fake skull instead, which made him look quite a bit creepier. I’m not sure where Jay first purchased the fake skull, but it was in his dorm room when I met him. A few years ago, it became one of WCK’s most cherished toys. Yeah. The child who thinks “The Tinkerbell Movie” is “scary” keeps a grinning skull in her room. I know that’s confusing, but so is the fact that I married a guy who purchased a fake skull. Human beings don’t always make sense.
Anyway. They put Skull Guy casually on the couch. Later that afternoon, I went into the living room to get a library book and nearly peed myself. After I complained to Jay about Skull Guy hanging out in the living room, he promptly removed him from the couch. Later, I innocently walked into our bedroom, and … 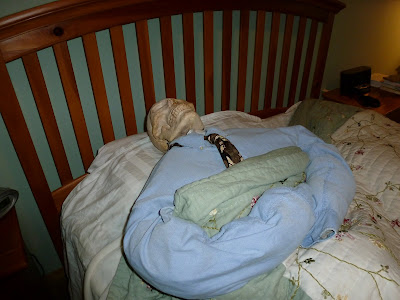 Oh, my husband is hilarious!!
Right then, I started quietly hatching a plan. As soon as Jay fell asleep, I would put Skull Guy in his car, ready to greet him when he left for work on Monday morning. MWA HA HA HA!
Unfortunately, shortly after the bed trick, Jay dismantled Skull Guy and put him away.
“Dang it!” I said. “I was going to put him in your car!”
I could tell Jay instantly regretted dismantling Skull Guy.
“Aw, man,” he said, genuinely disappointed. “That would have been so funny.”
Yes, yes it would have. There’s always next year.