It’s been two months since I last published a blog and let me tell you this, it has been quite the two months. After having this wretched disease for over five years, I thought little would surprise me. Well, I expected the whole looming death part to have a different trajectory to the routine I am used to, but as I said, I expected that to be slightly different. I never considered what the steps will look like getting from the relapse stage , to the end of the line stage. I always assumed it’d be easy but increasingly, I feel I might have been far too optimistic.
Somehow, in five years, I had settled into an uneasy routine with My Myeloma. It’s quite simple really, I would have some sort of treatment, which would work for a bit, then it would fail, then the Medically Trained People would somehow magic up another treatment for me to start, and thus the cycle would start again.
I had five years of this. Don’t get me wrong, some horrible things happened along the way; it shouldn’t make the list, but losing my hair is still up there in the shitty events. I didn’t really enjoy any of my transplants and I definitely did not enjoy the time I had to spend five days in St Bart’s because I caught Influenza B. On the plus side, I thoroughly appreciated any drug regime that could be taken at home. I had a few of those.
What am I saying, all of that is in the past? If the last two months have taught me anything, and I am still trying to decipher exactly what further lessons I needed to learn by the age of 33 about my cancer, is, that Myeloma is a load of fucking shit that if there were a hell, it should be confined to purgatory trapped under a full, infected bed pan, never to bother nice (even horrible) individuals again. Oh yes, just to keep you up to date, I have also learnt about bed pans recently. And sick bowls. And those cardboard things that collect one’s waste by resting on the loo seat. I know it all.
On 7th September, I returned to UCLH for a clinic appointment. Prior to that I had found out that the trial at St Bart’s was no longer working and I had been experiencing what can only be described as extreme and unbearable pain that I had blamed on doing too much on holiday. The pain itself was predominantly in and around my right rib cage.
As I had self diagnosed every relapse since 2012, I had spent about a month begging for some imaging. St Bart’s took no action, I would question if the staff knew my name, but thankfully UCLH did know my name and once they had the necessary images, man, did they take action.
I was admitted to UCLH immediately on the 7th September following an appointment, during which my family and I were told we were coming to the end of the line of treatment. Not only that, but there was also something wrong with my neck. I say ‘something’ because I think it took me well over a week to get my head round what a compression on one of the C vertebrae meant. I don’t recommend it. I don’t recommend developing a mass that pushes through your rib cage either, Alien (or at least that’s how I like to picture it) style. It cannot be sugarcoated. I entered that hospital with Mamma Jones and Big Sister in a bad way.

And that bad way only worsened over the next six, that’s right, SIX weeks…

I don’t even know where to start. If you are independent, like to toilet alone and enjoy walking around, I’d say what followed would be your worst nightmare. It was mine.

You may have deduced that not all was or is well with my spine. Due to the compression and the location of it, I arrived at my bed to be told that I was no longer permitted to walk. As in, no walking at all. Not only was I not allowed to walk but if I wanted or needed to be moved in my bed, I would have to be rolled by four Medically Trained People. My head and neck, could not be elevated anymore than 30 degrees. Three weeks later, this changed to 40 degrees and the news that I could roll myself, but by this point, the damage to my ego had already been done. Not to mention the damage to my legs for not walking for three weeks.
Despite being in denial about it, shitting is a necessity that eventually cannot be avoided. The day I could not avoid it was Day 11 in hospital when there were only male nurses available. I’m a 21st Century Woman, so I went ahead and let the team of four roll me onto a bed pan. I did not say anything when they had to roll me again to clean my bum. Nor did I say anything the next day, during one of my five daily bedsore checks, when a different Medically Trained person discovered a lump of faeces stuck in my bottom from the previous day.

That was a low point.
Washing myself alone, was and remains impossible and for the duration of my stay, washes were restricted to hand towel baths in my hospital bed. If I was lucky, the Medically Trained Person cleaning my nether regions might have even shut the window to my room for some privacy. Due to staff shortages, during the last week of my stay, no washes were offered and I went a week without being cleaned. Needless to say, washing hair is extremely difficult and something that has happened twice between the 7 September and now.
Thankfully, due to what I like to call ‘performance issues’ I was given a catheter for the first three-four weeks of my stay. After that, I relied on my good old pelvic floor muscles to stop me from soiling myself. How can that be when you cannot walk, I hear you ponder? The answer is long, boring, excrutiatingly painful and another blog post. In the interim however, you just need to know that I have a full back brace, handcrafted to fit my body and imagined perter boobs, which I am allowed to wear to mobilise.
…………………………………………………………….

This really is a story of never ending gibberish. Maybe grab a cup of tea. Have a wee break. I’d have one with you but my mouth is currently tainted by the delectable taste of 60 mg of steroids per week, so I am only able to stomach the taste of fruit juice.

Where was I? Right, my health. In addition to the bony stuff, the really smart Medically Trained People had to find out what was wrong with me and if there was anything that could be done about it. This period felt like it would never end, with the feedback I was getting changing nearly everyday. I’m not going to regurgitate all of it, just trust me when I say it was very confusing and everyday resulted in me hysterically crying and Big Sister getting angry.
I lost count of how many CTs, MRIs, ultrasounds and x-rays I had, but I know it was a lot. It was not uncommon to be collected by the porters, without any clue where I was going or why. I knew where they were taking me on week one, when I had five fractions of radiotherapy to heal my ribs, but as for the rest, it was not like I was in the strongest position to argue or question. I simply did.
Things went downhill relatively quickly. By Day 4 I had tested positive for Paraflu, which gave me a chest infection and resulted in me being relocated to an isolated room on a ward where the staff are nice, but significantly understaffed. One night, I rang my bell for 2.5 hours before I saw a nurse. On the plus side, it meant that I had my own room with a nice view over London. A bonus when you consider the fact that the woman opposite me on the shared ward addressed me as ‘Emily’ and wished me well.
The hardest part of having the lurgy was that I did not see somebody without a mask on for five weeks. Talk about dehumanised.
The chest infection persisted, so for extra buoyancy, I also developed sickness and diarrhoea and a temperature. It was lush.

Notice how I am yet to mention My Myeloma? There’s a reason. My Myeloma failed to behave in the manner of which I have become accustomed. For the first time since I was diagnosed with the wretched beast, I was afraid of it. It wasn’t behaving how I have known it to behave. My paraprotein was the highest it had ever been, and no matter what drugs were tried or the volume of fluid pumped into me, my calcium would not shift below 3.0.

And still I carried on. It may be the biggest test of my willpower and personal strength (because I really have no meaningful life until I am rid of the brace), but I unequivocally told the Medically Trained People that I am not ready to give up with my life yet. As long as the treatment maintains a reasonable balance between quality of life and those dastardly side effects, count me in. Sign me up.

I’m not ready to die yet.

Unfortunately, we soon ended up spending some time thinking about my death. I completed my will and paid for my funeral. Once I was fortunate enough to be on a reasonable treatment regimen, I suffered from what I now believe to be called an Acute Kidney Injury. At the time, it was badged as something far graver than that. I cried for what felt like days. I got so angry with My Myeloma, I told it I hated it. I begged for a reprieve, identifying many people other than myself who deserved the award for ‘Most Deserved Recipient Of The Most Stubborn Myeloma in This Fair Land.’ I really am not saying that other people deserve this illness; I was just surprised to learn that I had not come to terms with the fact I have it. Death seemed so much closer than before I walked into clinic on the 7th September. I don’t know when it will come and that’s the scariest part. How long is my piece of string?
My need for tears grew when I was taken off my morphine, which I had taken in slow release form everyday for five years. There were nightmares and ticks, to accompany my sickness and diarrhoea. I won’t lie; it was a tough, sleepless few days.
Do not fear, I will not prolong this anymore than I need to. They require near constant testing, but for the moment, my kidneys are behaving. It took a week or so for them to turn around. For how long they’ll stay in this state, only time will tell…

Six weeks after I entered UCLH, on 19 October, after a lot of pushing from my family, I was discharged. Gone were the at least daily bloods, out with the cannula resulting in the constant beeping of unanswered alarms. Goodbye to the four hourly observations, even at 3am. Welcome to sudden and ill prepared loneliness with an absent of nurses. So long institutionalised regime. Hello privacy. After six weeks, I am to fend for myself once more.
Just between us friends; It’s fucking terrifying. 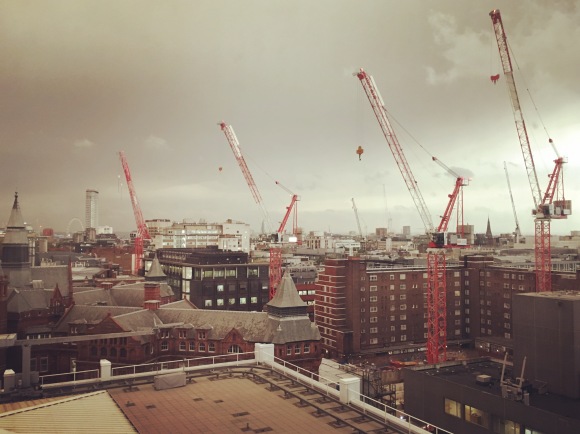 The view from my hospital window