Skip to content
We started off at 7.30am, cleared both immigration checkpoints within minutes. Traveling outside of peak holiday season is great, no crowds, no queues. We reached Malacca at 10.30am, incredible!  Three hours from point to point – home to Malacca town. There was more than enough time to have our favorite lunch of  chicken rice ball. We rounded it up with delectable chendol at 88@Jonker. Even had time to wander along Jonker Street and picked up a couple of Ts. 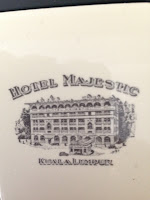 KL is about a little more than an hour on the highway. The newly opened Hotel Majestic is situated between the National Musuem and KTM KL train station. These are all historic buildings. Hotel Majestic 1936 was a 4-storey building, now beautifully restored with a 15-storey new wing next to it. Think Majestic Hotel in Malacca, similar construction style of the renovated old and new wings but much bigger and grander and lovelier. It’s more a business than a tourist hotel.
Its location in the historical center has a certain charm, being far from the congested hotel belt and malls of the golden shopping triangle at Bukit Bintang. I quite like that distance – far from the maddening crowd.
The afternoon high tea offered at the Tea Lounge in the Colonial Wing is so very English. Lovely sofas to lounge and chat away the afternoon – not to be hurried.
With a late tea, we decide to have a late dinner and this is to be authentically KL. We had to have the sang har meen (fresh water prawn in crispy noodle). KL Chinese food is to be found along the whole stretch of Jalan Imbi. The hotel provides an hourly shuttle to Starhill and Jalan Imbi is a street away. It is so convenient to hop on the shuttle and enjoy (because we don’t have to drive) the 20 minutes through the harrowing traffic – KL city is always congested whatever time of the day.
We did not think we need to call Restoran Keong Kee at 54 Jalan Barat, a mistake, it is closed on Wednesday. But a stone throw away, there is New Ocean which is much larger and lots of people. It is hard to compare which is better when we only have the sang har meen once in a long while, a year ago? But we are fully satisfied and able to walk slowly back up to Starhill for the last pick up at 10 pm.
I am so happy with my physical well-being. To be confident enough to get on a public vehicle and walking to intended destinations, is marked improvement. I tire so easily and always needed to have private transportation in case I have to get back to rest. I still get a bit nervous making such choices as going out with friends, going in group transport, never know when the tiredness sets in. I do get backache when I am out for prolonged time. The back is mechanically faulty – having had 3 compression fractures – would have weakened the spinal column and really don’t know if anyone with similar problem, has been able to correct or strengthen their back. The kyphoplasty done to 2 of the compressed fractures has taken away bone pain but not the muscle aches. But really I do not have much to gripe about, I am much much better and doing more and more activities.
The hotel has a little orchid arboretum which is located at the walkway from the Tower block to the old wing. We could only look in as the glass doors was locked. Unfortunately the hotel management do not intend to open it for all guests, it is accessible for a fee, then one can dine in there.
On the last day, we had some time to go to the Pavillion by shuttle and for the evening meal, we had it in the Colonial Cafe. It was truly an authentic Hainanese chicken chop well covered with a sweet sourish worcestershire sauce with green peas. One main and one dessert between the two of us. Of late we are happy to share a main course and we really do not enjoy full heavy meal, it is too body-busting and I just feel uncomfortable at the end.
It was a delightful short break. KL so near.