Skip to content
When I got on this pony I knew I would be dealing with Melphalan and with getting my own stem cells back.  I knew there would be some other things but I was NOT prepared for the plethora of drugs that have come my way. 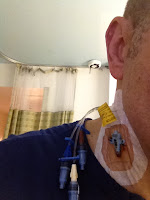 Melphalan – that’s the chemo that kills everything.  I arrive on Monday and get my port put in (by three lovely female doctors that rock me in and out of there in minutes).  Once the port is put in we can do the Melphalan.  But the Melphalan also needs a prep-drip so in addition to Saline there’s…
Decadron – the dreaded steroid that will make you “kick the cat” re-enters my life along with…
Benadryl – to prevent potential allergic reactions
Ativan – a sedative – and also fun if you want to watch pictures on the ceiling when there really aren’t any pictures! 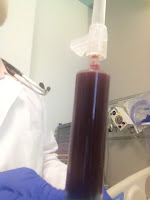 This all happens on Monday evening and I need to wait 18 hours before I can have the transplant of my stem cells.  So sometime late morning on Tuesday (my Day 0, aka Birthday) they come in w/ the big red squirt gun.  this is one of three tubes that have been thawed (and I can’t figure out how but they originally were yellowish in color!)  Again, we get pre-transplant prep: Dec, Ben, Ativan plus…
Zolfran – anti fungal
Accyclivir – anti viral
Levaquin – anti biotic and….
OxyCodone – pain relief, really powerful pain relief!

And then the actual transplant begins.  This is a “push” where the doc is connected to your IV w/ this syringe and they slowly push the plunger thus pushing this straight down into your veins.  And you feel it – it’s like a black pepper irritation in the back of your throat.  Sort of a tickle that will make you cough but I placed it as pepper.  This feeling is directly relevant to the speed with which the doctor is pushing the plunger.  I tried a popsicle which seemed to deaden the peppery feel.   But all of this was apparently providing great entertainment for the NP and the RN as she walked out of the room asking the RN, how much Ativan did you give him?  He’s seeing things on the ceiling while sucking on a popsicle….

And I was – there was a daddy long legs (mosquito hawk) on the ceiling that had long flowing antennae like the cockroach from WALL-ee and he was making cocoons and moving around the whole time while the NP was asking the other nurses to see if they could see anything. 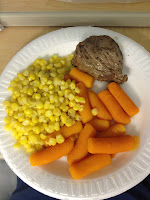 This process took place in two installments and i had the same fun in the second.  Needless to say, the Ativan is on the charts but not given going forward.  The OxyCodone was the other item to help make things easier.  This was really to relieve the pain in the port that was put in since the local had worn off. This also helped me make it through the night.  Lil’s steak couple with corn and carrots (which can’t really be miserable!) rounded out my night.

But the next day (Day 1) I felt like I’d been hit by a Mack Truck.  I feel like the list of “preservatives”, etc that were mentioned above fully explains my feelings.  I’ve finally started eating something today but I still don’t have a real taste for anything.  But at least the prune juice worked – that was a major accomplishment!